What to know about Apple's big announcement today

AP
Tech geeks and everyday smartphone consumers around the world are waiting with bated breath for the world's biggest computer company to make its latest announcement. It's not just about a new iPhone -- check out what you should know ahead of today's Apple event.

Back to the Flint Center
While Apple normally holds its release event at San Francisco's Yerba Buena Center for the Arts or on its own campus, Today's event will be held at the Flint Center for the Performing Arts at De Anza College in Cupertino, where Apple is headquartered. The Flint Center is where Apple founder Steve Jobs initially unveiled the Mac in 1984 and where he introduced the iMac in 1998, so the location holds historical significance for the company and could be a sign of a bigger than normal announcement.

Tap to see video if you're viewing on news app.

Aerial drone video shows that a three-story structure is being built in front of the Flint Center. The speculation is that it will be used for product demonstrations.

Tap to see video if you're viewing on news app.

New iPhones (yes, plural)
Apple has sold nearly 500 million iPhones so far and it seems much of the world is awaiting the debut of the iPhone 6, if that's what it's going to be called. It may also really be two phones -- a 4.7-inch phone more along the lines to what iPhone users are used to and a a larger 5.5-inch model. The larger phone is the one drawing the most speculation as Apple has been slow to hop on the "phablet" bandwagon that includes Samsung's recently released Galaxy Note 4 and Galaxy Note Edge. In addition, the new phones would mean that iOS 8 is almost certainly being rolled out, too.

Another heavily anticipated feature for the phones is the arrival of sapphire glass for the screen. The thinner, lighter, super scratch resistant glass is supposed to be a substantial improvement on the iPhone 5's Gorilla Glass. Cracked iPhone screen owners, rejoice. 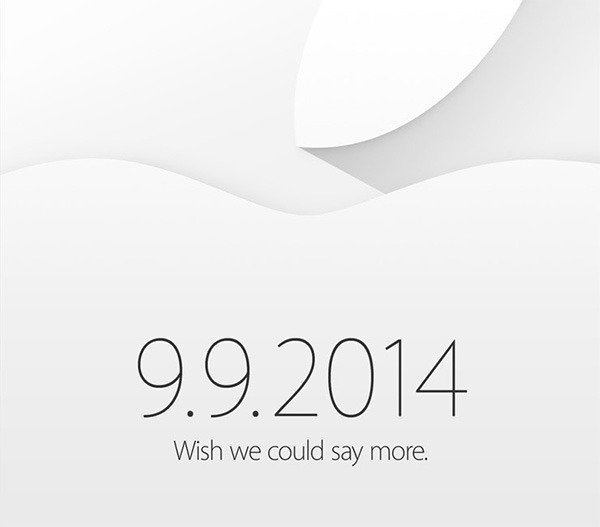 
Finally, an iWatch
A wearable tech device has been loudly rumored at the last several Apple product events and this might finally be the day we see the "iWatch," as it's been dubbed by speculators. The device would likely be the latest entry into the fitness tracking sector, but with the advantages of being native to the Apple universe and being more stylish than some of the other options on the market. Health tech gurus have speculated that the watch might go so far as to monitor heart rate and body temperature.

iCloud security
Apple has been under the magnifying glass in the past few weeks after dozens of celebrities had personal photos leaked onto the Internet. It's believed a hacker accessed the images through the victims' Apple iCloud accounts. The FBI is currently investigating and as of Monday, Apple is now notifying users when their iCloud account is being accessed through a Web browser.

iCredit?
Speaking of security, your phone may soon replace your credit cards. The new phones are rumored to have a technology called Near Field Communications (NFC), which allows devices to communicate with each other. That means your phone could send payment information. Hello, future.

On the event invite, Apple said "We wish we could say more." Today, they will.