All we know about Rev. Billy Graham's funeral arrangements 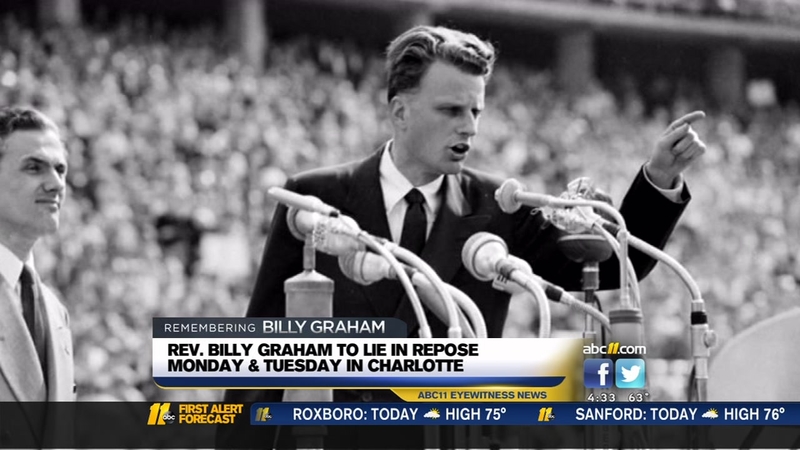 All we know about Rev. Billy Graham's funeral arrangements

MONTREAT, NC (WTVD) -- The Rev. Billy Graham, who transformed American religious life through his preaching and activism, becoming a counselor to presidents and the most widely heard Christian evangelist in history, has died.

Graham's body was moved Wednesday from his home in Montreat to Asheville, where a funeral home is handling the arrangements, said Mark DeMoss, a spokesman for the DeMoss Group, a public relations firm.

A private funeral for Graham will be held on Friday, March 2 in a tent at the library site and he will be buried next to his wife there, DeMoss said. Invitations to the funeral will be extended to President Donald Trump and former presidents, DeMoss said.

Responding to a reporter's question, DeMoss said Graham had not spoken to Trump since the flamboyant businessman became president.

The last time Graham and Trump were together was at Graham's 95th birthday party at the Grove Park Inn in Asheville.

Graham will be buried next to his wife, Ruth, who passed in 2007, at the Billy Graham Museum and Library in Charlotte.

Like her, Graham will be buried in a plywood coffin made by prison inmates.

Notes of remembrance can be posted at BillyGraham.org