One Boston driver got fed up after an out-of-state driver took his spot. So he shoveled snow on the other driver's vehicle. (Craigslist / Boston.com)

Here's why you don't mess with Boston.

Last week, a Boston resident became fed up after he spent hours digging out his parking spot, putting down a space saver the spot, and then came back to see another driver then leave their vehicle in that area, according to Boston.com. So the fuming Boston driver did the only logical thing: he blanketed snow all over the car.

The driver explained the reasoning behind his snow fury in a Craiglist post. 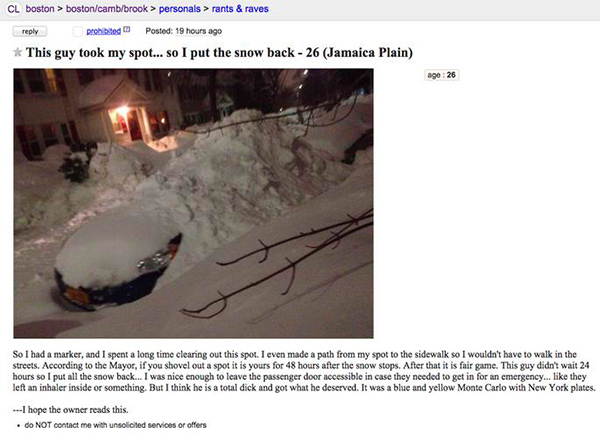 "So I had a marker, and I spent a long time clearing out this spot. I even made a path from my spot to the sidewalk so I wouldn't have to walk in the streets. According to the Mayor, if you shovel out a spot it is yours for 48 hours after the snow stops. After that it is fair game. This guy didn't wait 24 hours so I put all the snow back... I was nice enough to leave the passenger door accessible in case they needed to get in for an emergency... like they left an inhaler inside or something. But I think he is a total dick and got what he deserved. it was a blue and yellow Monte Carlo with New York plates.

The post has now been deleted, but the driver left an old bookshelf in the shoveled spot on February 8 when he went to do his evening shift for Uber, according to Boston.com. "I've lived in Boston for years and I'm from New England . . . this was just not a cool move. I'm getting home at midnight and I had nowhere to park," the anonymous driver told Boston.com.

The driver said that he received emails from people that he should pop the car's tires. "I didn't think that was ok," he told Boston.com.