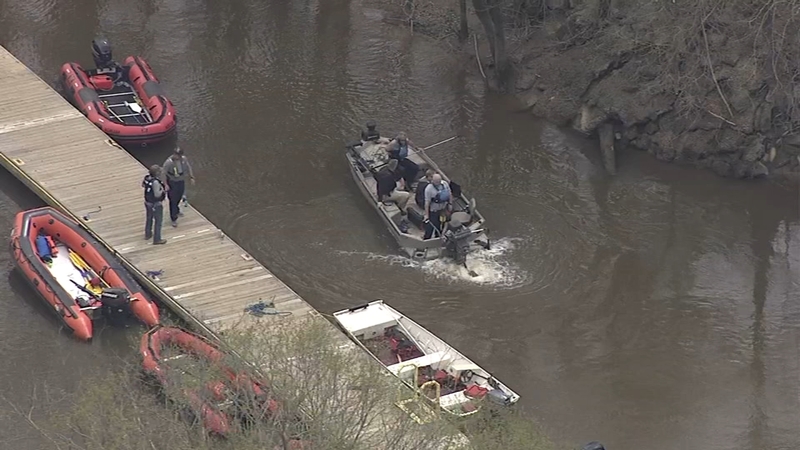 GOLDSBORO, N.C. (WTVD) -- Wayne County officials said the body of a 5-year-old who went missing while fishing with his father has been found.

Officials said the body of 5-year-old Braylin Holman was found around 2 p.m. Monday in the Neuse River.

A search remains underway for his 38-year-old father.

The Wayne County Sheriff's Office said that the father and son were fishing on the Neuse River at the Goldsboro Boating Access Area off Highway 117 around 8 p.m. Wednesday when the boy fell off the dock.

The father immediately jumped in after his son.

A witness on the bank of the river called 911. A boater in the river tried to grab hold of the father and son but was unable to get either of them.

The Wayne County Sheriff's Office released the harrowing 911 audio from a witness on the bank of the river.

Arriving in Goldsboro, where crews are searching for a missing father and son. Several boats are in the Neuse River and a helicopter also looking from above. #ABC11 pic.twitter.com/1tOvu6CNrt

Wayne County search crews arrived shortly thereafter and began searching by boat and helicopter. Unfortunately, darkness and fog forced officials to suspend the search before the boy or his father were found.

Search teams were back in the water and in the sky on Thursday afternoon. Wayne County Sheriff's Office said it had about seven or eight boats searching on the river and a helicopter flying overhead.

Officials said the current Thursday was just as strong as it was late Wednesday night.

"It's definitely a tough situation, our hearts are out with the family, of course, they're going through a lot right now. But also the witnesses that were out here yesterday. It is a tough scene," said Joel Gillie, a spokesperson for the sheriff's office.