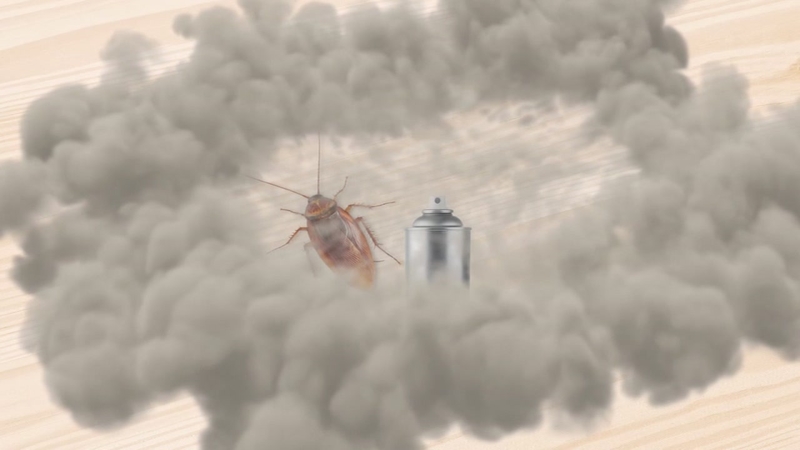 RALEIGH, N.C. (WTVD) -- A new study from NC State is saying that bug bombs may not be as effective at eliminating cockroaches in your home as you may have thought.

"They smell bad. They're unsightly. We really don't like them," said Dr. Zachary Devries, who works in the Department of Entomology and Plant Pathology at NCSU.

He says his work with affordable housing is what triggered their study after it was noticed that bug foggers weren't exactly a 'cure all' for eliminating house roaches.

"The conclusion was they don't work at all," Devries said.

Researchers involved in the study say that cockroaches may have built up an immunity to pyrethroids, the active ingredient in bug bombs.

ABC11 reached out to the makers of Raid and Hot Shot to ask them for their take on the study findings.

The makers of Hot Shot, Spectrum Brands, did return our calls but never sent a statement regarding the study.

S. C. Johnson & Son, Inc., the makers of Raid, referred us to the Household and Commercial Products Association. Dr. Steven Bennett, the senior vice president of HCPA released this statement:

"Many consumers rely on household insecticides and repellents, including foggers, aerosols, and baits, to protect their homes from insect infestations. Household pest control products are regulated by the Environmental Protection Agency (EPA) and reviewed by the EPA Office of Pesticide Programs for safety. These products go through an extensive risk assessment that takes into account many factors, including practices that affect exposure, time spent using the product, toxicity, ingredient levels, and activity patterns in the home.

In addition, EPA requires manufacturers to demonstrate the efficacy of these products. Safety is always the first priority of the household and commercial products industry, and total release foggers are an important tool in pest control defense. Consumers can be confident that, when used according to EPA-approved label directions, these total-release foggers are both safe and effective."

Dr. Devries said that in the study, they followed the directions indicated on the packaging perfectly.

"We followed the label instructions to the letter and we had absolutely no control of cockroaches," he said.

ABC11 also reached out to the EPA. A spokesperson for the EPA released the following statement.

"EPA requires efficacy data for all products used on cockroaches, including the total-release foggers. Pests, such as cockroaches, that hide in cracks and crevices can be difficult to control using total-release foggers because the pesticides used in the foggers must contact the pest to kill it. If the material does not reach the cracks and crevices where the insects are hiding, they will not be killed. Please see EPA's Guidance on Efficacy Testing web page for additional information and frequently asked questions."

Devries says a gel bait may be a better solution, which, he says, are more effective and easier to conceal.

"So these are products that are very different from sprays. You're not putting (out) lots of insecticide. You're putting out tiny dabs of insecticide in concealed locations," he said.
Report a correction or typo
Related topics:
health & fitnessraleighnc statebugsstudyinsectbug safety
Copyright © 2021 WTVD-TV. All Rights Reserved.
STUDY
COVID pill reduces risk of being hospitalized or dying by 89%: Pfizer
Could long-haul COVID be the 2nd pandemic?
Eating 1 hot dog may take half an hour off your life, research finds
Study predicts rapid COVID spread in schools without proper guidelines
TOP STORIES
LATEST: NC reports more than 3,000 new COVID-19 cases
1st case of omicron COVID variant identified in US
What we know about the Michigan school shooting victims
Parents sound off on Wake County Schools reassignment plan
4th student dies in MI school shooting, alleged gunman ID'd
Toys "R" Us is back! New store to open in New Jersey
Show More
Alec Baldwin speaks out on 'Rust' shooting in exclusive ABC interview
Wife of famed music exec is killed in Beverly Hills home invasion
'Home Alone' house listed on Airbnb for 1-night stay
Sec. Mandy Cohen, who led state's COVID-19 response, to step down
Fayetteville teen entrepreneurs embody spirit of giving back
More TOP STORIES News