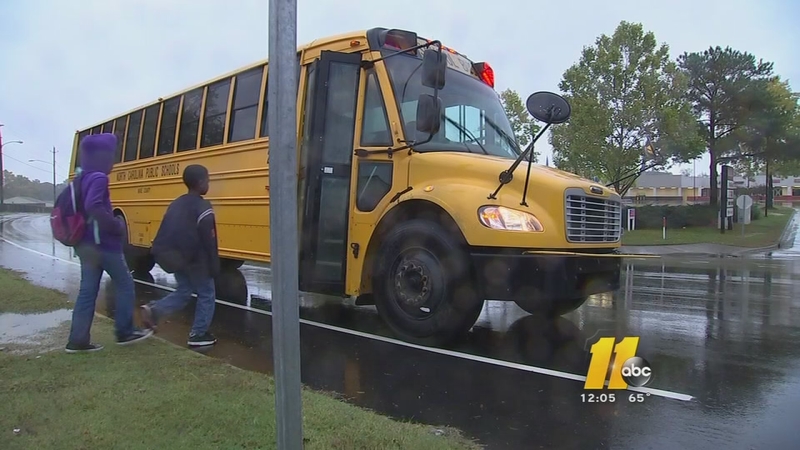 Parents were expecting to brace for another round of school bus delays after the school system posted on their website Friday that transportation staff worked to minimize the length of bus rides.

Parents learned about the strike through automated phone calls - which frustrated many of them, who called their schools and couldn't get more information.

Rhonda Alexander - a parent who got the call from Wake Schools - said she had already planned to pick her two children up Friday before she was told that some buses would run late.

"When I got to the school, oh my God, it was so hectic," she said. "I thought this lady was about to fight. She called and asked if they could pull her child out of class. The teacher said no. So just imagine, when they got to the school. It was crazy!

School officials say they are hoping they won't have a repeat of the experience.

However, at least one parent was not happy with Monday's bus service - she wrote on ABC11's Facebook page that her child stood out in the rain for an hour..how long is she supposed to be out there not knowing if and when the bus will show up?"

Wake Schools tweeted that "buses often run late when it's raining (because) loading takes longer at each stop."

On Friday, some of the school bus drivers did not show up for work, saying they're frustrated over paychecks that didn't contain a promised 3 percent raise.

Drivers said they're having a hard time paying their bills, and some are getting evicted from their apartments.

"If I was a bus driver I would have been mad, too, but at the end of the day, you've still got bills to pay, you know what I mean," Alexander said. "Still got to put food on your table."

The drivers said they never meant to put the students in the middle of this dispute, but felt taking a stand against the school district was their only option.

Wake County Schools blame the paycheck issue on a processing error, and the district is supposed to issue corrected checks this week.