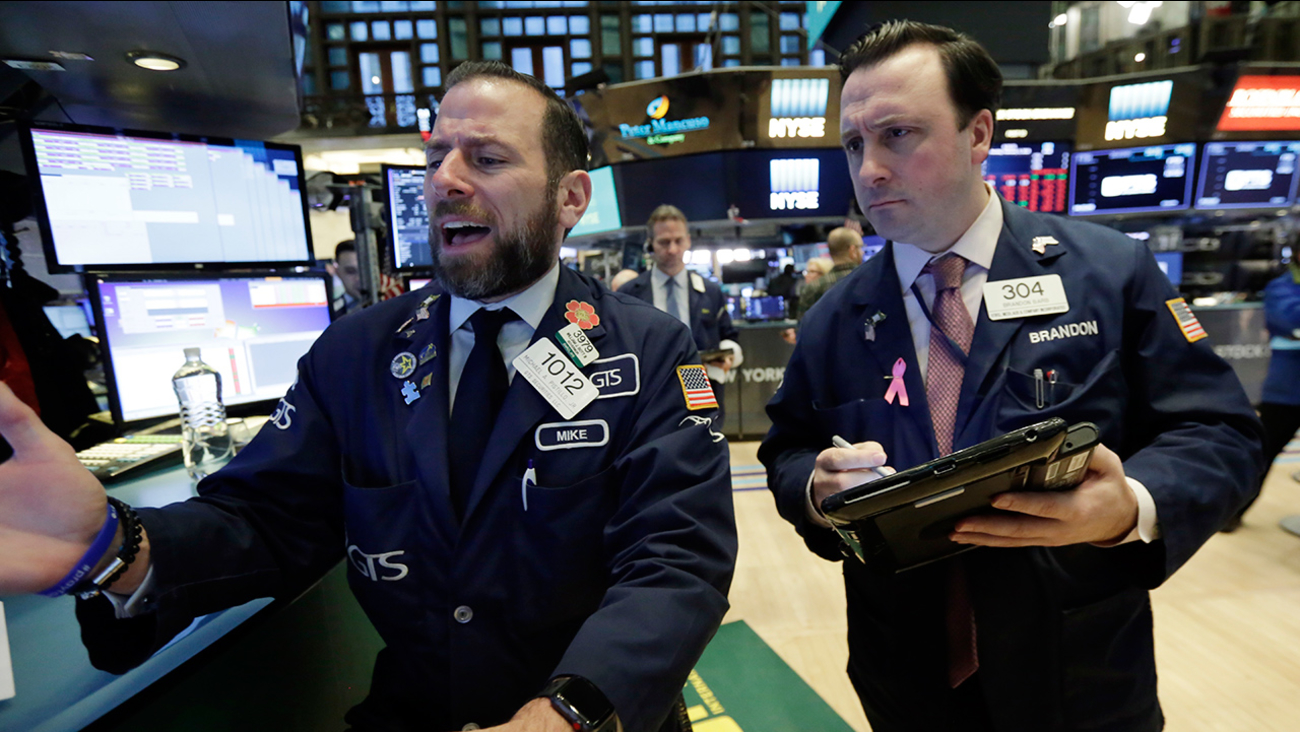 The Dow Jones industrial average plunged more than 1,100 points Monday as stocks took their worst loss in six and a half years. Two days of steep losses have erased the market's gains from the start of this year and ended a period of record-setting calm for stocks.

At its lowest ebb, the Dow was down 1,597 points from Friday's close. That came during a 15-minute stretch where the 30-stock index lost 700 points and then gained them back.

Market pros have been predicting a pullback for some time, noting that declines of 10 percent or more are common during bull markets. There hasn't been one in two years, and by many measures stocks had been looking expensive.

"It's like a kid at a child's party who, after an afternoon of cake and ice cream, eats one more cookie and that puts them over the edge," said David Kelly, the chief global strategist for JPMorgan Asset Management.

Kelly said the signs of inflation and rising rates are not as bad as they looked, but after the market's big gains in 2017 and early 2018, stocks were overdue for a drop.

The Standard & Poor's 500 index, the benchmark most professional investors and many index funds use, skidded 113.19 points, or 4.1 percent, to 2,648.94. That was its biggest loss since August 2011, when investors were fearful about European government debt and the U.S. came close to breaching its debt ceiling.

The slump began on Friday as investors worried that creeping signs of higher inflation and interest rates could derail the U.S. economy along with the market's record-setting rally. Energy companies, banks, and industrial firms are taking some of the worst losses.

The S&P 500 has fallen 7.8 percent since January 26, when it set its latest record high. Investors are worried about evidence of rising inflation in the U.S. Increased inflation might push the Federal Reserve to raise interest rates more quickly, which could slow down economic growth by making it make it more expensive for people and businesses to borrow money. And bond yields haven't been this high in years. That's making bonds more appealing to investors compared with stocks.

The stock market has been unusually calm for more than a year. The combination of economic growth in the U.S. and other major economies, low interest rates, and support from central banks meant stocks could keep rising steadily without a lot of bumps along the way. Experts have been warning that that wouldn't last forever.

As bad as Monday's drop is, the market saw worse days during the financial crisis. The Dow's 777-point plunge in September 2008 was equivalent to 7 percent, far bigger than Monday's decline.

Stocks hadn't suffered a 5 percent drop since the two days after Britain voted to leave the European Union in June 2016. They recovered those losses within days.

The last 10 percent drop for markets came in early 2016, when oil prices were plunging as investors worried about a drop in global growth, which could have sharply reduced demand. U.S. crude hit a low of about $26 a barrel in February of that year. A drop of 10 percent from a peak is referred to on Wall Street as a "correction."

Wells Fargo sank $5.91, or 9.2 percent, to $58.16. Late Friday the Fed said it will freeze Wells Fargo's assets at the level where they stood at the end of last year until it can demonstrate improved internal controls. The San Francisco bank also agreed to remove four directors from its board.

Bond prices tumbled after moving sharply higher on Friday. The yield on the 10-year Treasury slipped to 2.73 percent from 2.84 percent. That hurt banks by sending interest rates lower, which means banks can't charge as much money for mortgages and other types of loans.

Stocks in Europe also fell. Leading political parties in Germany, which is the largest economy in Europe, have struggled to form a government. Chancellor Angela Merkel's conservative Union bloc and the center-left Social Democrats are still in talks about extending their alliance of the past four years.