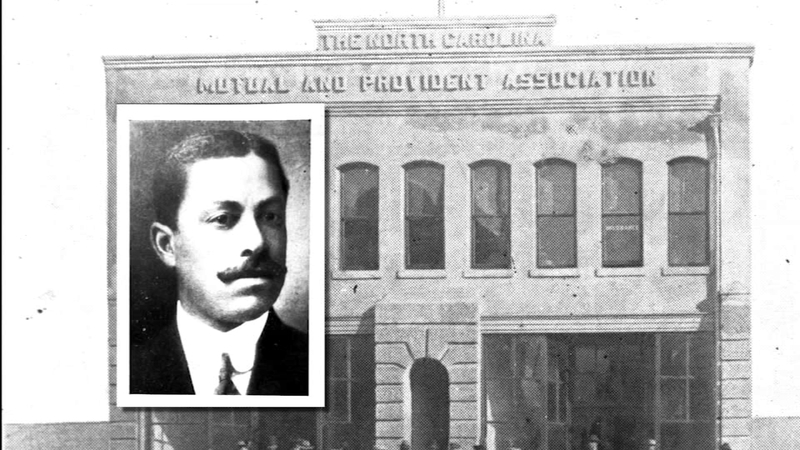 
The Bull City's evolving skyline reflects the interest of big business. But the roots of those relationships are visible a few mikes away, in a vintage brick building on Fayetteville Street and one of the oldest bank headquarters located on West Parrish Street.
"You can't tell Durham's story of 150 years without telling the story and the contribution of Black business people that 120 years ago, In 1898, they created North Carolina Mutual Company," said entrepreneur Carl Webb.

Webb and historian Eddie Davis say John Merrick was one of the visionaries who made a difference in Durham.

Those business moves in Durham happened at a time when racists, like the mobs who burned Black-owned businesses in Wilmington and ran many families out of town, were a constant threat in North Carolina.


"Had their voting rights restricted, through the General Assembly and through other kinds of, ways of intimidation'" Davis said. "So people believed, very strongly, that if the political avenues were closed to them, that business was the opportunity that they needed to forge."

"It really was the beginning of the economic revolution of Durham, and Merrick was right there in the midst and involved with a lot of that. Because he formed a close relationship with Washington Duke because he was his personal barber," said Webb. "And it was through, I believe, Merrick gleaning information from Washington Duke that he later started looking at economic development opportunities that would benefit his community, the black community."

The focus was life insurance for African Americans.
"But they needed a businessperson," said Davis. "Someone who could be the daily administrator of this business and CC Spaulding fit that bill."

"He was the longest serving president of the company. Started out, in Durham managing a grocery store." Webb said.


"And CC Spaulding was a very shrewd business man," added Davis, "but also someone who could relate to the common people

Spaulding's the man behind the creation of Mechanics and Farmers Bank, which still operates in Durham. It's not the only surviving reminder of the area known as Black Wall Street.

"Much of the brick that you see, red brick, all around downtown Durham was fired and made by Richard Fitzgerald," said Webb. "When you look at the St. Joseph's Church on Fayetteville Street that now houses the Hayti Heritage Center, that brick came from Richard Fitzgerald. So a lot of the relationship between the white community and the black community happened because of the leadership and leverage the negotiations that were happening with these black leaders."