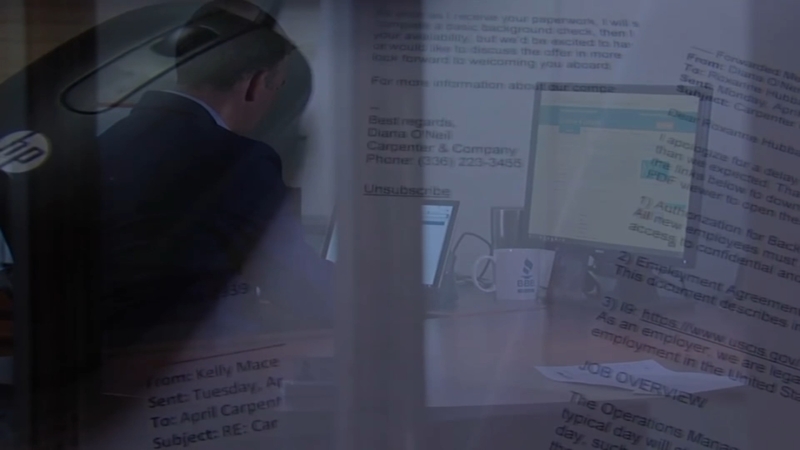 MORRISVILLE, N.C. (WTVD) -- Millions of Americans have been forced to work from home during reponse to the COVID-19 pandemic.

So how are they performing?

"People want to sustain life as an individual, as a company, and they want to be effective," he said, "They're taking working from home as a privilege. They're not taking advantage of it."

He came into the company's southern regional headquarters in Morrisville to talk with ABC11 about what his company is learning about people working from home during the pandemic - not just from their experience but what their clients' companies are learning.

It was so quiet in the Keystone regional headquarters office you could hear the proverbial pin drop.

Like many American offices, no one has been here for months.

The forced office evacuations in mid-March happened quickly, much quicker than if companies had intended to do it.

"If we tried to move to that beforehand we'd see committees, budgets, it would take months if not a year to make that transition. We did it overnight, weeks at the most," Rogers said.

He added that one of the first things business leaders learned is that they can pivot more quickly than they ever imagined.

And in the post-COVID-19 world, it may be nice to know how quickly a business can change its model.

The second thing businesses learned is that most employees are far more dedicated and hard-working than some managers believed.

"By and large, people are really being effective and it's neat to see that we can have flexible schedules and leaders can be empathetic towards that," Rogers said.

Rogers also said employees have even come up with innovative ideas while working from home -- ideas that will allow them to get their jobs done while still affording more freedoms such as flexible schedules.

It was something that employees had been asking from skeptical bosses for years and, he said, those employees jumped at the chance to prove it.

"Leaders had no other choice but to trust their people. And what they found was they're trustworthy," Rogers said. "People want to be successful in their business. They want to support the company that they are working for or they would leave. And I think this played it out well."

Rogers said executives need to use the lessons being learned now to plan for their business' future.

He implored executives to take heed, "The mandated transition into a work-from-home environment has created some unexpected upsides, and leaders need to pay attention to and they need to cultivate what beyond what we're experiencing in COVID right now."