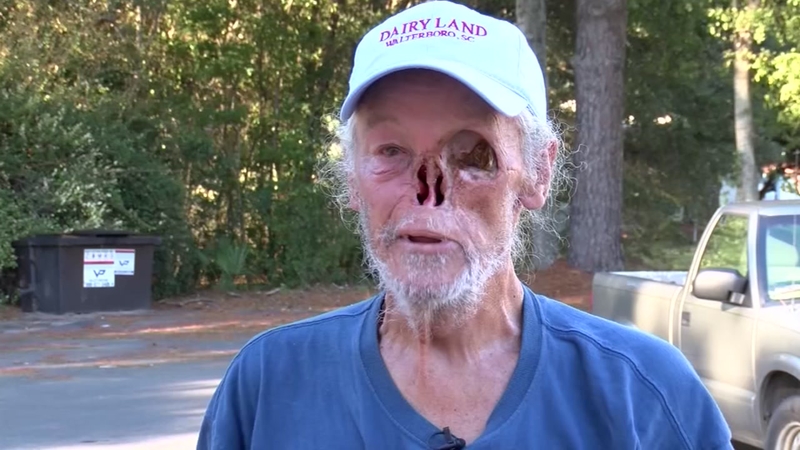 Kirby Evans said he's a regular at Forks Pit stop in Walterboro, but when he went to eat there on Monday, he was caught off guard.

"I felt somebody reach up and grab me like this and jerk me in her office," Evans said.

Evans lost his nose and his eye during a battle with cancer, which he won. He said the employee's demands were downright hurtful.

"It hurt deep inside. I had never been treated like that. Never," he said.

Shortly after the incident occurred on Monday, Evans' daughter Brandy posted about it on Facebook, and it went viral.

"It's really made me proud to watch everybody rally around him and let him know that he doesn't have to hide his battle scars," Brandy said.

Brandy also said that the employee involved commented on the post, saying the following:

"I IN NO WAY TRIED TO HURT YOUR FATHER" and "I HAD NO CHOICE! IT WAS RUNNING MY CUSTOMERS OFF."

The incident even caused one of the employees at the restaurant to resign.

"This right here is my resignation. I'm fed up with this place," said Forks employee Brandy Harley.

Luckily, Kirby Evans isn't as focused as much on the incident as he is on how supportive the rest of his community has been.

"I'm telling you what, I didn't know there was that many people that cared but there are. They're out there everywhere," he said.
Report a correction or typo
Related topics:
societysouth carolinahead and neck cancercancer
Copyright © 2022 WTVD-TV. All Rights Reserved.
CANCER
Cancer patient at UNC Hospitals gets wedding she deserves
'Forever chemicals' present in drinking water could cause cancer
Traffic stop becomes powerful moment for trooper, a dad with cancer
Basketball player, a lead scorer during cancer battle, dies at 22
TOP STORIES
Man accused of killing 9-year-old in Durham on trial in federal court
NC abortion legal battle looms amid standoff between AG and GOP
Why you should pay down your credit cards right now
FDA advisers recommend updated COVID booster shots for fall
Fort Bragg soldiers reunite with families after deployment
Fourth of July 2022 will cost families more this year
NC GOP unveils state budget; House backs Medicaid expansion path
Show More
2 Raleigh women shot while on business in California
Workers fired for not joining company's daily Christian prayer: EEOC
ACC changing scheduling model for football in '23 and beyond
Witness: Trump grabbed steering wheel, demanded to go to Capitol
Sheetz announces limited-time discount on gas ahead of July 4 holiday
More TOP STORIES News