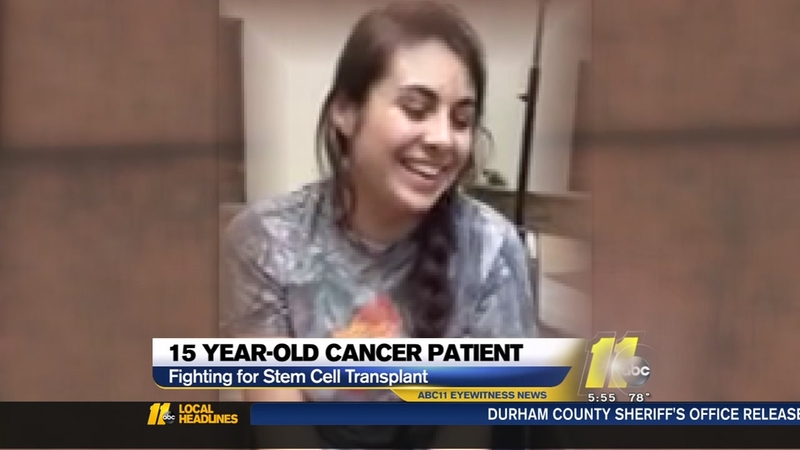 DURHAM, NC (WTVD) -- Shelley Boone is the mother of a 15-year-old girl with cancer. Boone contacted ABC11 after her insurance wouldn't cover the stem cell treatment her daughter needs at the hospital she's being treated.

She reached out to ABC11 after hearing another mother thank the station for helping her 13-year-old son, Hunter Pietrowski, get coverage for the same treatment from Medicaid.

Fifteen-year-old Brooklyn Boone found out she had Hodgkin's Lymphoma in May. The South Granville High School volleyball player is being treated at Duke University Hospital and went through four rounds of chemotherapy over the summer. Her family thought her cancer was in remission until it came back with a vengeance last month.

"We were devastated, scared," Shelley said. "That is not something she wanted to go through again."

As it turns out, Brooklyn has a more aggressive sub-type of Hogkin's. It's stage two - so doctors at Duke believe she has a greater chance of survival if she follows treatment including a stem cell transplant - something her mother, Shelley, said their insurance denied at Duke but approved at UNC.

"She's had all of her treatments here, and knows everyone here. Her psychiatrist, her P.T., everyone is here," Shelley said at Duke. "It makes me furious, you know? I'm a self-employed cosmetologist, so our health insurance is through the marketplace, and I never dreamed that we would need a transplant last year."

She said she doesn't understand why they wouldn't cover the procedure where her daughter's always been treated. She appealed the decision and was denied. Now, she's pleading with the company to change their mind.

"Look at Brooklyn as a life and not a number," Shelley said.

"I want to see her life back," she said of her hopes for her daughter. "She's an honor student. She's a student of merit. I'd like to see her go to college and live her dream."

ABC11 reached out to Aetna, the parent company of Coventry Health Care, which covers the Boones, and they said in a statement:

"Brooklyn's stem cell transplant is covered under the terms of her Coventry health plan. We have authorized the transplant and will pay for it."

The only question is where the procedure will take place.

We wish Brooklyn and her family the best possible outcome.