Coronavirus NC: After being forced to shut down, Cary flower shops giving away flowers for good cause 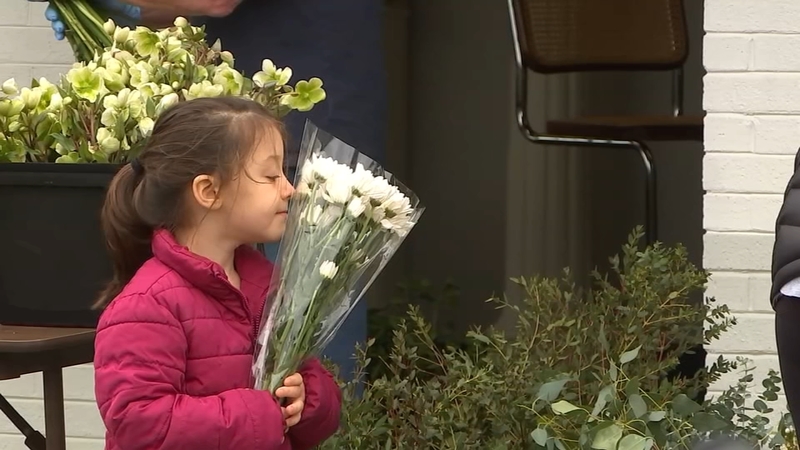 Forced to close, Cary flower shops give away unsold flowers for good cause

CARY, N.C. (WTVD) -- Since many businesses were forced to close because of the COVID-19 pandemic, they're trying to make the best of a bad situation. A Cary flower shop and wholesaler is giving away flowers in hopes of brightening the days of those stuck at home.

There are all different types of colorful flowers sitting outside of Every Bloomin Thing and Nelson's Blooms along East Chatham Street in Cary.

Owner of Nelson's, Gary Nelson, said, "I'm a wholesaler florist so I get flowers from all over the world and I couldn't stop my shipment from coming in from South America, and Miami this week. It's a lot of flowers, and I don't want to throw them away."

Nelson and his wife, Renea, decided to get creative with the stay-at-home order issued by North Carolina Gov. Roy Cooper, which mandates non-essential businesses such as flower shops close their doors.

Instead of letting all the flowers go to waste, they are giving them away for free outside of their shops.

"It would be a sin to let those flowers die in the cooler," Renea Nelson said.

While the flowers are free, if you want, you can leave a donation. It won't go toward the flower shop; instead, the money will go to Hope Community Church's Mina Project.

The project is one that Hope has done for several years, and the church took $110,000 and gave its members an envelope with some money in it. The Nelsons got $10.00 each in their envelopes.

"We are tasked with multiplying that money as many times as we can and bring it back to the church, and the church will take all that money and disperse it through the community," Gary Nelson said.

With the flower giveaway, the Nelsons have raised more than $3,000 for the Mina Project in just two days.

"We are just trying to take a rough time and make something good of it," Gary Nelson said.

Morgan Wise showed up to get some flowers.

"I thought it was a great cause, so I thought I'd come out here and support," Wise said. "They use the money to give back to the community and help build other churches in the area."

The Nelsons will be outside of their shops at 407 E. Chatham St. in Cary until noon each day until the flowers run out. Gary Nelson said that may be just a few more days as the response from the community has been overwhelming.
Report a correction or typo
Related topics:
societycarywake countyflower showcoronavirusfree stuffgood newscovid 19 pandemicfeel good
Copyright © 2022 WTVD-TV. All Rights Reserved.
TOP STORIES
2 to 3 inches of snow possible in Triangle
Voting bill collapses, Democrats unable to change filibuster
'We can't get any more': Stores struggle to restock shelves
Third arrest made in Black Friday shooting at Streets at Southpoint
Daniel Turcios shot 5 times after crash on I-440, RPD reports
NC legislature votes to further delay primaries until June 7
'He was special': Durham friends remember Andre Leon Talley
Show More
Cumberland County mom spins way to $500,000 lottery prize
Victim in fatal I-85 crash was just 3 months old
19-year-old military driver charged in wreck that left 2 Marines dead
Earnhardt Jr. to be inducted into NASCAR Hall of Fame
Raleigh man feels lucky to be alive after bullet found above his bed
More TOP STORIES News