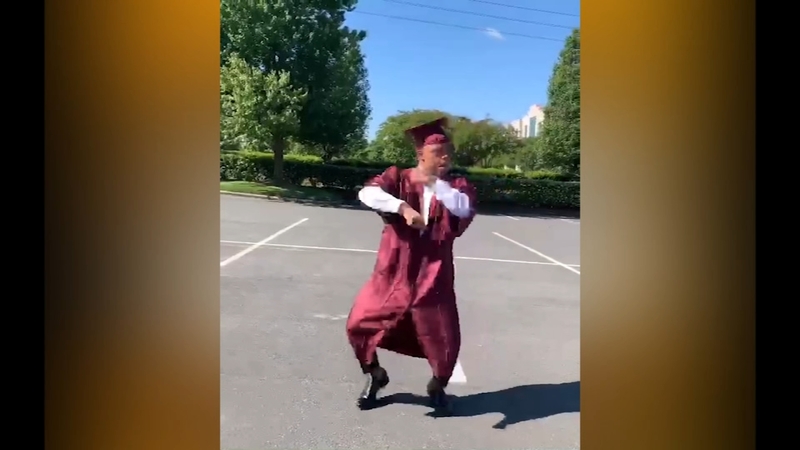 DURHAM (WTVD) -- Graduation is a time to celebrate. A special moment deserving of a bright spotlight. Denied the traditional stage, N.C. Central graduate Chance Kennedy created his own shining moment which has now gone viral.

Three days ago Kennedy posted this video on social media. It begins with powerful emotion before turning into a dance celebration.

"I came into college in 2016 dancing and I left dancing," said Kennedy.

With his brother recording, mom was driving alongside for the perfect shot.

I caught up with @NCCU grad@ChanceKennedy3 about his viral video this afternoon. Hear how it went down and his thoughts on the overwhelming reaction on @ABC11_WTVD at 4:30.
He's taking this swag back to the @NCCUAthletics soon! https://t.co/KQZ0lE5SNi

"I would start moving and my mom wouldn't move the car. So I was like, 'Mom you have to start moving the car when I start moving.' Me and my mom and my brother had so much fun recording the video, laughing. It was just love."

And people love watching it. Tens of thousands already have.

It's been picked up by national outlets like BET and The Shade Room. Kennedy said he didn't create it with a viral intent.

"It's just like surreal right now. It's cool like to see all these stars and all these people loving the video for something I just did off of fun."

A similar video he'd seen on social media provided the inspiration. On what would have been graduation day in Durham, this business marketing major made the most of being quarantined in Charlotte.

"This video explains me so well. That's why I loved it because it's silly. All I do is just dance and laugh and have a good time all the time."

The response won't replace a missed graduation ceremony, but it could open some doors. At least he hopes so.

"The views and viral, that's cool and all but at the end of the day, how can you capitalize on those opportunities in life. What can you do to reach out to people who can, connections and stuff like that."

Speaking of - another Chance liked the video, Chance the Rapper.