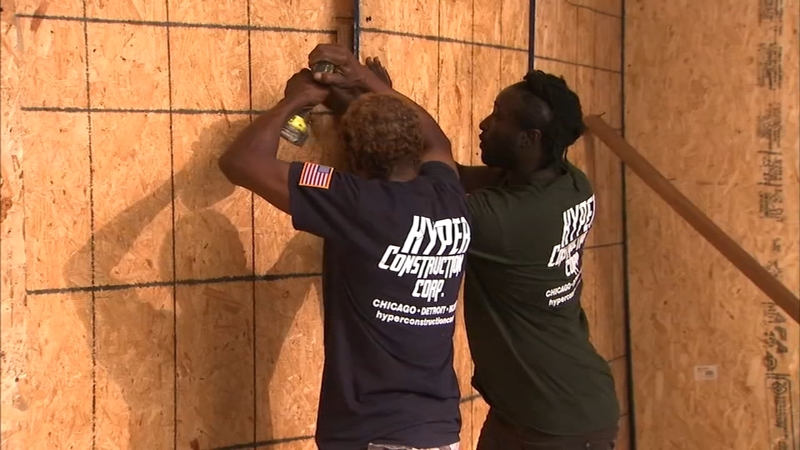 Streets in the Loop were quiet, with an increased police presence. Access to downtown will be restricted from 9 p.m. until 6 a.m. for the foreseeable future, Mayor Lori Lightfoot told reporters Tuesday afternoon.

In response to the destruction, the Chicago Police Department's Detective Division has established a looting task force and is seeking help from the community. Anyone who may have videos, photos or information regarding the recent looting incidents is asked to contact the task force at 630lootingtaskforce@chicagopolice.org, or submit an anonymous tip at CPDtips.com.

While law enforcement works to track down the criminals responsible, communities are coming together to survey the damage and help businesses clean up their storefronts.

Not many expected The Ronald McDonald House near Lurie Children's Hospital, a charity for families with children in the hospital, to have their doors smashed.

"[We were] very concerned there was a lot of activity right in front of the house, people making choices that could put them at risk and put our families at risk so the staff was frightened," said Lisa Mitchell, of Ronald McDonald House Charities.

More than 30 families and their sick children were inside along with staff as they helplessly watched everything unfold outside.

"They are already in a really, really difficult spot, and having this kind of additional stress and worry about getting to and from the hospital even-though we are 5 blocks away because of safety concerns is just doubling the strain," Mitchell said.

No damage was caused to the inside of the house and no one was injured. The charity said it will continue to support families through the COVID-19 pandemic and will remain open despite the looting in the area.

To donate to RMHC visit: www.rmhccni.org.

"Waking up, it's sad... It's such a beautiful city. It's just being destroyed in front of our eyes," said Maddy Quinn, Chicago resident.

Kimberly Bares, CEO of the Magnificent Mile Association, joined ABC7 to discuss talk about the damage caused by looters along Michigan Avenue.

The restrictions Tuesday are the same as Monday night's.

Lake Shore Drive will be closed between Fullerton to the north and I-55 to the south.

All expressway ramps from Roosevelt Road to Division Street are closed in both directions during this time. Illinois State Police said the specific ramps affected are:

CTA trains will not enter the area surrounding downtown; from Fullerton Avenue to 47th Street and east of Halsted Street, the agency said, but bus service will remain open. Some buses will be rerouted due to bridge and street closures.

Divvy bike service will not be available between North Avenue to Ashland Avenue and Cermak Road from 9 p.m. to 6 a.m.

In total, two people were shot, 13 police officers were injured and more than 100 arrests were made Monday, Chicago police said. The city had deployed more than 400 officers after seeing social media posts instructing people to loot the downtown.

The ABC7 I-Team obtained a social media post that Chicago police detectives said directed looters to converge on Gold Coast stores starting at 12 a.m. Monday. The post points looters away from the South, West and East sides, and instead tells them to target downtown and the North Side. Looters are encouraged to bring tools, ski masks and gloves.

The ABC7 I-Team has obtained a social media post Chicago police believe may have sparked the looting downtown, possibly in response to a police-involved shooting in Englewood.

However, 2nd Ward Alderman Brian Hopkins said he believes the city should have been better prepared.

"It's a recipe for ineffective law enforcement, and that's what we saw with this wide scale looting where the police officers were largely in a passive posture, letting it happen because they didn't know how to stop it, and it many cases if they did try to intervene it was a threat to their own life and safety," Hopkins said.

Most of the looters Chicago police took into custody early Monday morning will be given bail.

Many of those arrested went before Cook County judges Tuesday, and many are facing felony charges after police said they were grabbed inside stores or caught red-handed carrying clothes, shoes or jewelry as they climbed out of shattered storefront windows.

Neither police nor prosecutors have released the names of those charged, but the I-Team has monitored bond court proceedings and examined county records to get an idea of who was arrested and what is happening to the accused looters.

Many of those arrested are first time offenders.

Police said a 21-year-old Simeon High School graduate was arrested on suspicion of looting the Gucci store and was said to have $41,000 in Gucci items in his car. His bond was set at $10,000.

At the Macy's in Water Tower Place, police said a 29-year-old woman was caught inside with an armful of shirts police said she dropped. Her bond was set at $2,500.

During the virtual bond hearings Tuesday, one Cook County judge said monetary bonds were important because of the disruption caused by the looting. Many, if not all, of those charged with looting will be freed on bond.
Report a correction or typo
Related topics:
chicagoloopmichigan avenuegold coastriotchicago crimelori lightfootlootingchicago violencemagnificent milei teamchicago police department
Copyright © 2021 WLS-TV. All Rights Reserved.
TOP STORIES
TIMELINE: NC weather could include severe storms today
Photos released from shooting during Juneteenth event in Raleigh
Husband wanted for questioning in wife's disappearance
LATEST: Nursing home deaths jump 32% in 2020
Woman shot by home invader in Durham
Child tax credit: Will you be getting monthly payments?
Republicans ready to block elections bill in Senate showdown
Show More
Task force aims to save Outer Banks highway from flooding
NC troopers to beef up patrols on I-95
Ways you can save money next time you rent a car
Low-wage tenants join in on Raleigh's Moral Monday rally
Old JCPenney store in North Hills undergoing a transformation
More TOP STORIES News