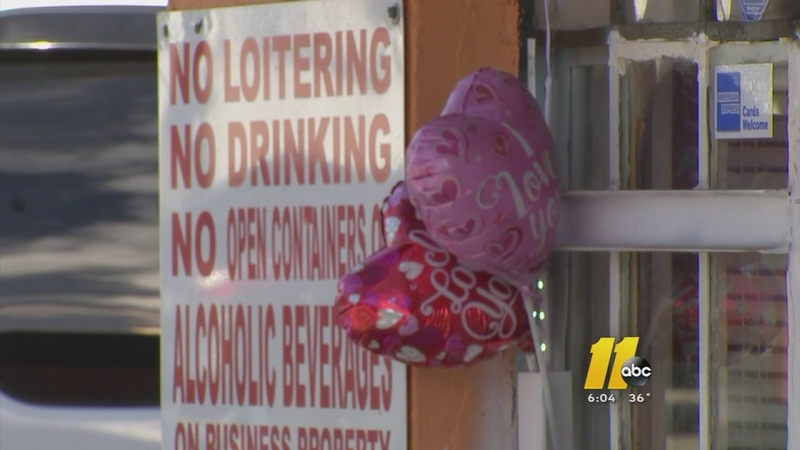 LUMBERTON, NC (WTVD) -- A balloon with an animated "Cars" character and a teddy bear are eerie reminders of the life lost inside a family convenience Sunday morning.

They're in loving memory of 3-year-old Manal, who Lumberton Police say accidentally shot and killed himself when he found a handgun behind the store's cash register.

The shooting happened just before 11 a.m. at the Brother's Minit Mart along Martin Luther King Drive. Authorities said the elder Manal Abdelziz, 56, was working nearby.

"He was actually working in the store at the time," LPD Capt. Terry Parker said. " I believe he was rolling some coins and had taken his eyes off the child for just a moment."

4:30-Teddy bear,balloons-eery reminder of 3 yo Manal who shot,killed himself after finding dad's gun in family store pic.twitter.com/6wjedwbDFI

One customer was in the store as the gun went off, prompting Abdelziz to call 911.

"The child went behind the counter where the gun was stored and actually gained access to the gun that way," Parker said.

"Dad was very upset as you can imagine," Parker said. "Being a father myself, I can't imagine what he's going through, and what he went through."

It's unclear whether the child died at the scene or on the way to the hospital. Police declined to comment on where he fatally wounded himself.

"I'd rather not say, because it is pretty graphic, so I'd rather leave that out," Parker said.

On Monday, family members and friends were in and out of the store, busy consoling one another and making arrangements for the boy who was his father's namesake.

Oliver Townsend is a regular customer who said the toddler would always greet people with a smile.

"Very sad," he said of the news, as he approached the store's locked doors mid-afternoon. "Mmm hmm, very sad."

A family patriarch working the cash register earlier in the day tearfully embraced his nephew. He expressed being tired of talking about the situation late Monday morning.

"I just want the world to know my son is a good person," he said, referring to the elder Abdelziz.

Abdelziz, who authorities identified as a Laurinburg resident, could face charges under a state law requiring gun owners to secure and restrict access to loaded weapons from children.

The Robeson County District Attorney's Office will make that determination once an autopsy and the police investigation are complete. Parker said his department is securing the 911 call, as well as running the handgun and prints through the ATF database.

He offered a message to gun owners: "Please, if you have weapons, keep them out of the hands of our little ones. Please render them safe if you've got kids, and please don't store them loaded.

"Make sure it's where the child cannot have access to it," Parker continued. "Kids are going to be naturally curious about firearms. Kids, they need to learn gun safety but at the same time we as adults have got to protect the kids to the best of our ability."