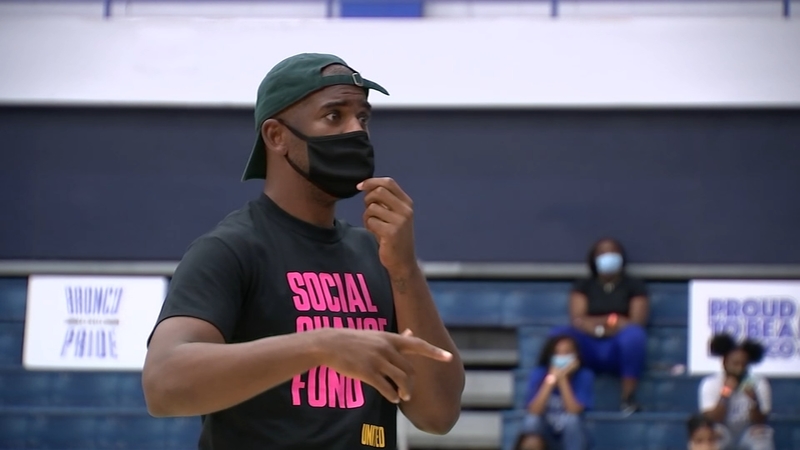 FAYETTEVILLE, N.C. (WTVD) -- Many NBA players showed their support for Historically Black Colleges and Universities while playing out the season in an Orlando-area bubble by wearing masks and themed shirts. Chris Paul even wore sneakers dedicated to HBCUs.

On Wednesday, Paul took his support a step further, visiting Fayetteville State University as part of his mission to encourage young Black people to vote.

Paul, a former Wake Forest star and former NC State standout Dennis Smith Jr. spoke to student-athletes inside Capel Arena at FSU talking about the importance of voting, what it means to be a Black man with the right to vote and opening the floor for questions.

A lot of #NBA players supported #HBCUs this summer in the bubble... CP3 is taking it a step further visiting HBCUs in NC ahead of the election with Dennis Smith Jr. pic.twitter.com/0viMzQFOtO

For Paul, who grew up in Winston-Salem, it was his parents who encouraged him to vote, but he knows that's not everyone's story and that's why he is making time for events like the one in Fayetteville.

"I miss my family like crazy," Paul said. "But this is important."

"It means a lot," Paul said. "For me, I was obviously really good at basketball, which gave me the opportunity to go to Wake Forest. If I'm not this basketball player, would I be there? No. My family would never be able to afford for me to go to a school like that."