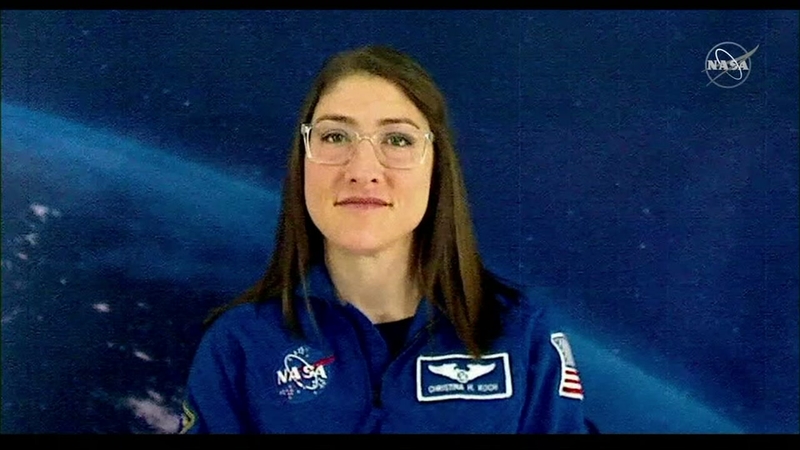 NASA astronaut and NC State grad Christina Koch is about to embark on her first space flight.

The NCSU graduate will launch aboard a Soyuz spacecraft from Kazakhstan for a mission to the International Space Station on March 14.

Koch will serve with the crew for about six months as a flight engineer.

"We have experiments in many different arenas of science numbering in the couple hundreds in our mission," Koch explained.

"There are quite a few, many types in physical sciences, biological sciences, medical and human research, technology demonstrations and all kinds of things in that nature. Some earth science, space science."

"So, it's a wide variety kind of all the different things at NC State you can study," she added. "For some of the medical experiments we actually get to participate as subjects, so we're looking at some of the effects of microgravity on long-duration space fliers to inform our study of future Mars mission design so that's exciting and of course as a physicist and electrical engineer, I'm very excited about a lot of the physical science experiments we'll be doing."

Koch grew up in Jacksonville and attended the N.C. School of Science and Math in Durham before earning two bachelor's degrees and a master's at NC State.

She credits her upbringing in North Carolina as one of the main reasons she became interested in space exploration.

"It's my honor to be an inspiration and I certainly have people in my life when I was in N.C. that inspired me, so I'm hoping to give back," Koch said. "Just growing up in eastern N.C. it was a beautiful place and I count that as one of the many reasons I became interested in things like space and exploration. The ocean obviously is a beautiful thing in N.C. that we have as one of our treasures and of course NC State and all the opportunities there."

NASA selected Koch in 2013 among more than 6,100 applicants as one of the eight astronaut candidates in the 21st class of astronauts. She has been in flight training for this mission to the ISS for five years.

"Training in Russia was definitely the new thing," Koch explained. "I had been training to meet the qualifications in the U.S. for several years and had become more and more integrated into the operations of the space station working in mission control and things like that, but the next step after getting an actual flight assignment was working intimately with the Russian space program and in Russia, learning the Soyuz spacecraft - because that's the spacecraft that will take us to the space station - so, having to hone my skills in speaking Russian and learning how to understand and control the fine details of a space craft being taught that in Russian has really taken all my training to the next level and has been a culmination of everything I had learned so far."
Report a correction or typo
Related topics:
scienceraleighncnc state universityrocketnasaastronautspace
Copyright © 2022 WTVD-TV. All Rights Reserved.
NASA
NASA's new telescope delivers stunning image of neighboring galaxy
Axiom Space's all-private mission returns to Earth today after delays
Hubble sees most distant star ever, 28 billion light-years away
Pluto's giant ice volcanoes could hint at the possibility of life
TOP STORIES
Wake Forest Montford Point Marine celebrates 100th birthday
Mother, son found dead outside Hope Mills apartments
Wake County reports highest rate of COVID-19 cases per capita in NC
With primaries finished, candidates turn focus to November
Biden invokes Defense Production Act for formula shortage
NC woman wins $2M on lottery scratch-off on Friday the 13th
Gas prices continue to hit new highs in NC
Show More
Target stock plunges amid disappointing first Quarter results
Cary store owner says thieves stole 300 gallons of gas
Wake Co. Board of Education approves meal price increase for 2022-23
1st monkeypox case in US this year reported in Massachusetts
Cha Ching! Grocery store employee wins big on day off
More TOP STORIES News