'Not going to give up:' Legendary boxer Christy Martin raises awareness for domestic violence in Harnett County 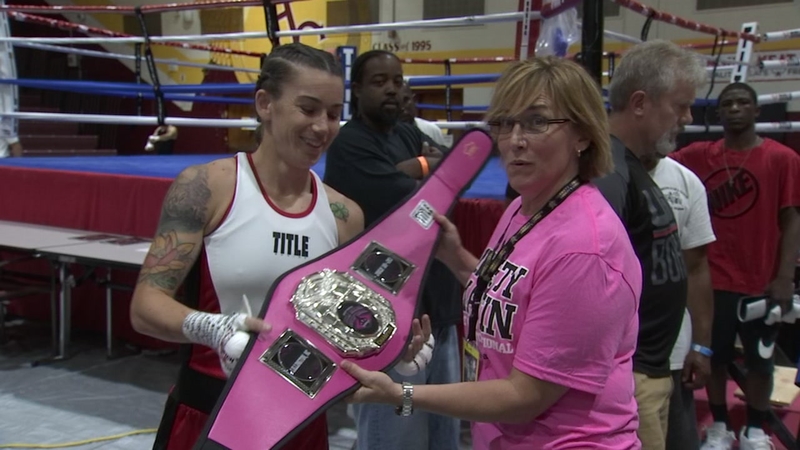 'Not going to give up:' Legendary boxer Christy Martin raises domestic violence awareness in Harnett County

HARNETT COUNTY, N.C. (WTVD) -- Harnett County hosted an amateur boxing tournament with three rings this weekend and nearly 350 boxers from all over the country attended.

All proceeds from the boxing tournament, which was provided free of charge by Title Boxing, went to Harnett County PAL--a police organization that aids underserved youth.

Also at the event: Christy Martin, a multi-time world boxing champion, who fought under Mike Tyson and helped bring exposure to women's boxing.

Martin used the event to bring awareness to something quite personal to her.

"The thing I'm most proud of is...I'm a domestic violence survivor," Martin said. "My ex-husband shot me, stabbed me, cut me up, left me for dead in 2010 and here I am today giving back."

Christy Martin is a multi-time world champion, fought under Mike Tyson and helped to bring exposure to women's boxing but what she's most proud of is being a domestic violence survivor. Her story tonight on @ABC11_WTVD pic.twitter.com/X705EJgpz2

Martin said at the beginning of the attack she didn't care whether she lived or died--but then something switched and she told herself she couldn't give up.

"The reason I was able to really get back on my feet is all about boxing," she said. "It's that mentality that I'm not going to give up. I have to keep fighting and that mentality is what's been able to catapult me into doing these promotions."

Martin is using boxing as a platform to talk about domestic violence, and her most recent stop was in Harnett County, where she teamed up with the Police Athletic League.

"This event we are doing this weekend will probably fund our program for six months and there's no way we could have done it without her," said Harnett County PAL Deputy and Director Mark Hornsby.

Both of which Martin is able to do at this event, offering tips and tricks and also a message to those who may be struggling.

"Don't wait," she said. "Just leave. You need to get your plan, stick by it, stick to it, and get out, because it's never going to get better and sometimes it will end like mine did. I'm lucky because I walked away as a survivor. There are many that don't walk away."

Why Christy Martin thinks it's important for her to share her story: pic.twitter.com/hGOcUa2FPB