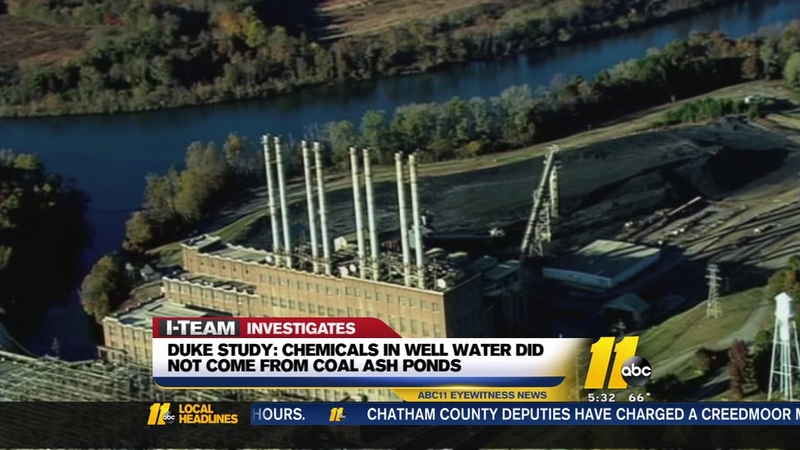 RALEIGH (WTVD) -- Coal ash is not to blame for toxins in well water around Duke Energy's coal plants in North Carolina, according to a new study from Duke University.

Dr. Avner Vengosh published the research Wednesday, showing hexavalent chromium and other chemicals believed by some to be the source of pollution in wells near Duke coal ash pits came from sources other than those toxic ponds.

Vengosh pinpoints the source as metamorphic volcanic ash underground, a natural part of the Piedmont's geology. His research finds hexavalent chromium, or Chrom 6, the cancer-causing carcinogen brought to public attention by Erin Brochovich, in well water all over North Carolina and suggests the entire Southeast could be at risk of elevated levels.

Vengosh explained to the I-Team that while other research he's done shows coal ash ponds are contaminating shallow surface water nearby, it shows no connection between the coal ash and the toxins found in surrounding well water.

"The chemistry of the water where we found hexavalent chromium is different from the chemistry when we see evidence of coal ash contamination," Vengosh said. "In the drinking water wells located downstream (from the Duke plants), we did not find evidence for any coal ash related toxins."

The Duke University study raises a host of new questions and concerns for homeowners living near Duke Energy coal ash ponds who have contaminated wells. For months, Duke Energy has been providing water for families living near their coal sites in response to the situation. Homeowners now have to wrestle with a study that appears to show Duke isn't responsible.

"When combined with previous research, there is overwhelming evidence that coal ash basins are not impacting water quality in neighbor wells," said Duke Energy's Harry Sideris, senior vice president of environmental, health and safety. "This study is an extraordinary development, particularly for hundreds of plant neighbors who have been needlessly concerned that ash basins contributed hexavalent chromium or other substances to their wells."

It also may have political implications. Critics of how Duke Energy and/or the state handled the coal ash situation have often tried to leverage the fact Gov. Pat McCrory was a 30-year employee at Duke for political advantage. This may take some of the wind out of those sails and gives McCrory a changed narrative to take to voters.

But Vengosh's study also appears to present a whole new set of public policy challenges. Because it shows the presence of hexavalent chromium around the state and in wells nowhere close to Duke Energy coal plants and because hexavalent chromium is dangerous regardless of whether it's manmade or naturally occurring, state health officials have to figure out what to do about it.

"This doesn't mean it poses less of a threat," Vengosh stressed. "If anything, because the contamination stems from water-rock interactions that are common across the Piedmont region, people in a much larger geographic area may be at risk. This is not limited only to wells near coal ash ponds."

Vengosh said a well near Salisbury registered hexavalent chromium at 24 parts per billion (ppb). The one in a million lifetime cancer risk for that chemical is 0.07 parts per billion. Vengosh's research shows that 85% of the wells he looked at were higher than .07ppb. Toxicologists say any amount hexavalent chromium can cause a person to get cancer but the risks go up substantially after 0.5 ppb.

The EPA is currently working on setting a federal standard for Chrom 6. One of the state's top officials, Dr. Randall Williams at the Department of Health and Human Serivces, told the I-Team earlier this year that they've been holding off on setting a standard as they wait for the EPA's decision.