ABC11 Together sponsors drug take-back day, more than 1,100 pounds of pills dropped off 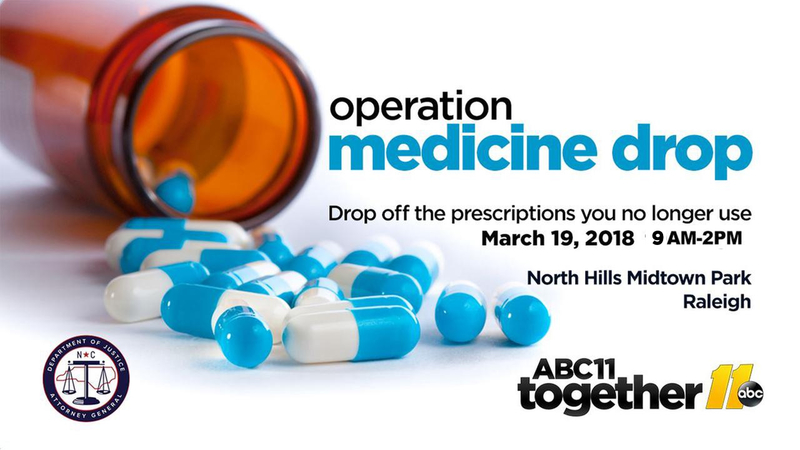 ABC 11 Together worked Monday with organizations and local law enforcement agencies across North Carolina to encourage the public to safely dispose of unused, unwanted and expired medication.

By providing safe and secure ways for people to get rid of unwanted prescription and over-the-counter medications, drug take-back programs help prevent accidental poisonings and drug abuse while protecting our waters.

Because of those efforts, more than 1,100 pounds of pounds of prescription medication and expired drugs no longer threaten public health. One pound is about 750 pills, so in all, 825,000 pills are out of Triangle homes.

Bring your outdated medications and drugs to #OperationMedicineDrop today! We’re here until 2 in Raleigh with law officers at Midtown Park, behind @ChuysRestaurant in North Hills. Walk or drive through for safe disposal of those drugs! #abc11 #abc11together pic.twitter.com/qqHrHL3SdS

On Monday, officers with the Raleigh Police Department and the Wake County Sheriff's Department accepted large and small bags of drugs, no questions asked.

They were busy between 9 a.m. and 2 p.m. at Midtown Park, located at South Hills Mall.

Donald McDonald shares his story of drug-addiction recovery and hope.

"Grandmother died, they had her in hospice care and they had the leftover medicine in a shoebox in a closet," he said. "They were concentrating on the funeral. Twelve-year-old grandson got his hands on those pills, brought them on the school bus, and a 12-year-old overdosed and died."

The opioid epidemic is taking lives and tearing families apart across the country, including our state. More people die in North Carolina of an accidental drug overdose - usually an opioid - than any other cause of accidental death.

Every day, four North Carolinians die from a medication or drug overdose. The number of overdose deaths has grown by nearly 400 percent in 16 years, from 279 in 1999 to 1,460 in 2015. Beyond the painful human cost, the economic impact of these deaths is $1.8 billion per year in medical expenses and lost work.

While the death toll is horrifying, it's just the tip of the iceberg. For every overdose death in North Carolina, there were 16 emergency department visits to treat non-fatal overdoses. Hundreds of thousands of people across our state are struggling with addiction.