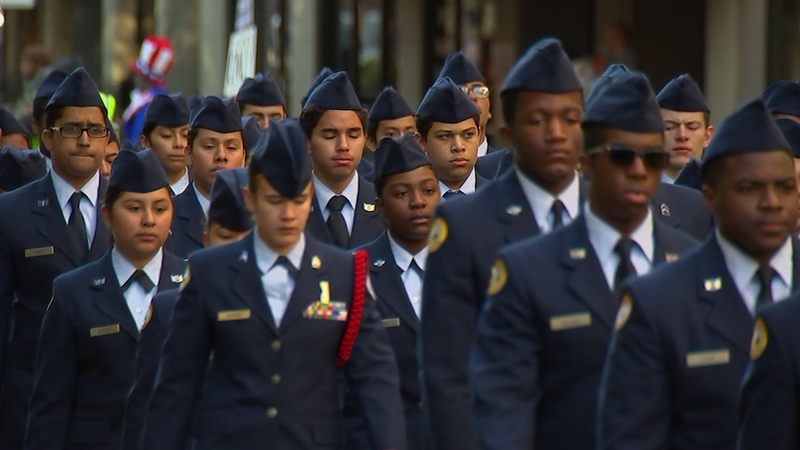 Many people fought and died in what was considered, briefly, the war to end all wars. Army veteran Patricia Harris reminded us of that.

"Wars have liberated slaves. They have also toppled terrorists. This is the reason why we're here. This is why we serve," Harris said.

Harris, a past State Commander with the American Legion who now serves as an alternate National Executive Committeeman, or NEC, advocates for the men and women who risk their lives for America.

"We served, we've got people out there still serving our nation," she said. "I wish more people had come out. I wish we could get the word out better, but we will take the support that we do have," she said.

The noticeably sparse crowd made some people wonder if gusty winds and temperatures in the 40s kept a lot of people indoors, but Harris said she doesn't believe that.

"No, I honestly don't. Because I do know that the Christmas parade will be up pretty soon, and I don't care if it's a blizzard out there. People will still show up!" she exclaimed.

However, those who missed their chance to observe the parade in real life can still show their appreciation by saying thanks to the veterans they know already or will meet in the days and weeks to come.
Report a correction or typo
Related topics:
community & eventsraleighparadeveterans day
Copyright © 2021 WTVD-TV. All Rights Reserved.
TOP STORIES
'I still have questions:' Families mourn teens killed in wreck
LATEST: US expected to authorize mix-and-match booster shots
White House details plan to roll out COVID vaccines for younger kids
Enrollment proposal information sessions begin for new WCPSS schools
Americans arrested for trying to board flight in Switzerland
These grocery items are about to get more expensive
Show More
Husband charged with killing Maya Millete, who vanished in January
Scientists attach pig's kidney to a human body, watch it work
Jan. 6 committee recommends criminal contempt charges for Steve Bannon
Queen Elizabeth accepts medical advice to rest, cancels N Ireland trip
Raleigh woman who survived H1N1 flu, COVID-19 encourages both vaccines
More TOP STORIES News