Tributes to Founding Fathers, other historic figures re-examined as Confederate statues come down

As the debate continues over the future of Confederate monuments, other tributes to historic US figures are now being re-examined.

RALEIGH, N.C. (WTVD) -- As the debate continues over the future of Confederate monuments, other tributes are now being re-examined.

Recently, the statue of Josephus Daniels, the former owner of the News and Observer and Secretary of the Navy, was removed from Nash Square. This week, the North Carolina State Board of Trustees voted to rename Daniels Hall amidst a closer evaluation of his white supremacist viewpoints.

The moves are part of a wider discussion involving tributes to individuals who were not part of the Confederacy, but held viewpoints that are now considered socially unacceptable.

"I think a lot of it has to do with the intention of the people who put the monument where it is. This whole debate over Confederate monuments has changed a lot when you look at who put them there, and when they put them there," explained William Sturkey, an author and assistant professor of history at UNC.

Over the past couple years, there has been renewed pressure to remove tributes to Julian Carr, the wealthy industrialist and philanthropist who was also a white supremacist.

"Julian Carr was in the Ku Klux Klan. We know this because he openly claimed membership in the Ku Klux Klan. How in the world do you tell a Black kid growing up in Carrboro that they should just overlook that because (he) gave electricity to a little section of the town," said Sturkey.

In 2019, Duke University removed his name from a building on-campus, as town officials in Carrboro, which is named in his honor, have grappled with how to address the matter.

While a full review of an individual's life is important, Sturkey said these controversial viewpoints typically played large roles in these people's lives.

"Oftentimes these people are chosen because they are activists. They're not just men of their times, they helped shape their times. They were often pushing for more extreme levels of white supremacism," Sturkey said.

There's more nuanced discussion over statues of Founding Fathers, such as the George Washington sculpture in the North Carolina Capitol rotunda. Washington, the country's first president and Revolutionary War hero, was also a slaveholder.

"I think one of the other things that's a really important difference between the Confederate monuments and (tributes) to Thomas Jefferson and George Washington is that Thomas Jefferson and George Washington are celebrated for their ideals that contributed to our republic. Whereas Confederate monuments actually celebrate people that actually fought against the United States of America," said Sturkey.

"I think if slavery is wrong for Confederates to participate in, I think it's wrong for Founding Fathers or anyone else to participate in. But at the same time, I think especially when it comes to their role in writing the Constitution and establishing the country and so forth, I would not put those folks in the same boat as individuals who tried to overturn the United States, tried to overthrow its legitimacy, tried to secede and so forth," said Claude Clegg, a history professor at UNC.

Clegg explained he's not surprised by the attention these monuments are now receiving, in part due to the highly partisan political climate.

Both Clegg and Sturkey believe local stakeholders should have a greater voice in the future of such tributes, rather than state officials making uniform decisions. A 2015 state law prohibits "the permanent removal of an "object of remembrance located on public property" with severely limited exceptions.

"I think the state has a role in this, whether it's in paneling commissioners or experts or university professors to provide guidance, context, history to local communities," Clegg said.

Neither professor believed adding a plaque next to a monument that contextualized the tribute would make much of an impact.

"It is hard to make the argument that tacking up a plaque on some 20-foot tall statue is going to provide the context that we need of that statue. People are visual. Our eyes are drawn to the 3-D image, the architecture, it's drawn to the statue - the soldier with the gun or the leader on horseback. It's not drawn to the plaque," said Clegg.

Tuesday, President Trump responded to attempts to take down a monument to Andrew Jackson in Washington, D.C. park near the White House by threatening anyone who vandalizes or destroys monuments--or has already done so--with 10 years in prison. 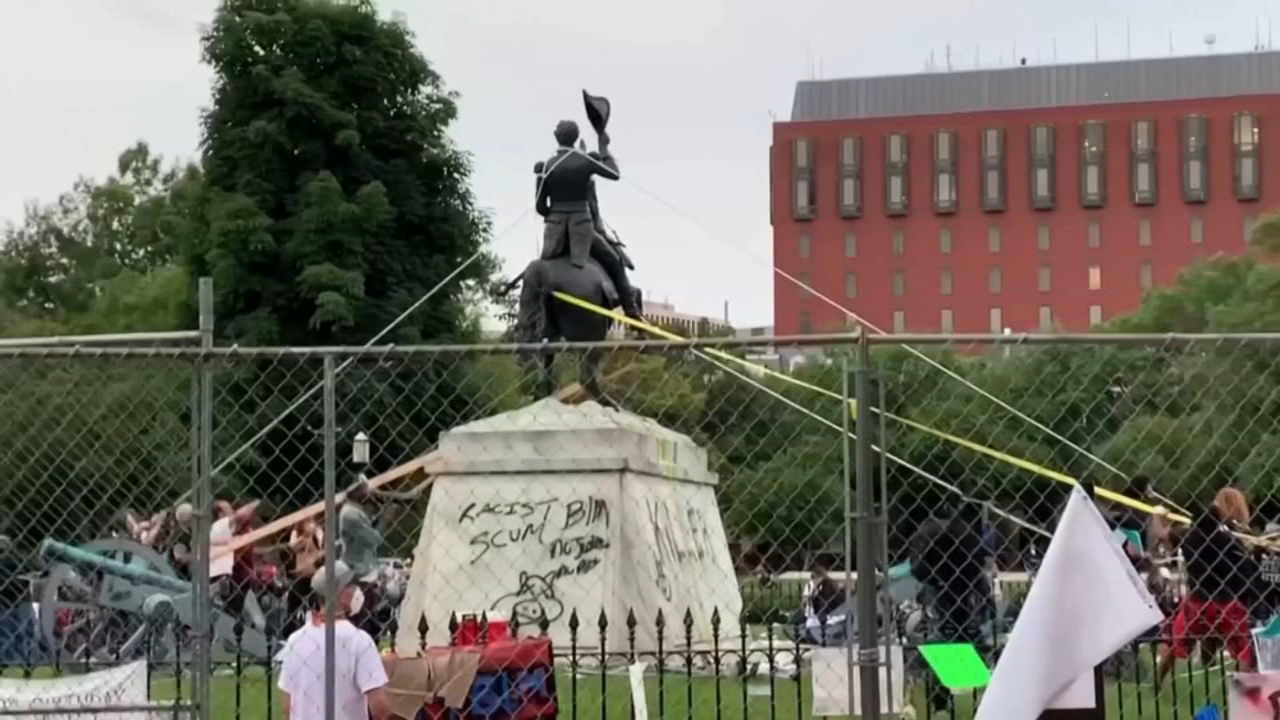