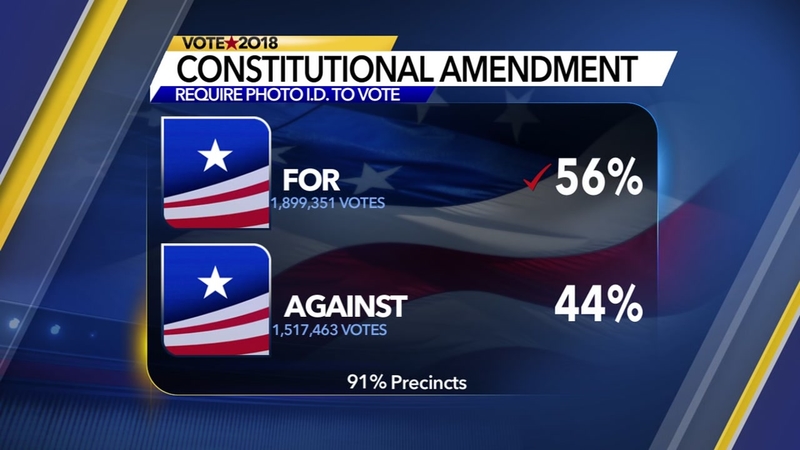 RALEIGH, N.C. -- Voters said no Tuesday to two amendments shifting power to legislators from the governor, while an amendment requiring a photo ID to vote and three others passed.

"The rejection of these two amendments shows that voters strongly believe in our state government's separation of powers and do not support extreme power grabs by state legislators bent on rigging the system in their favor," the ACLU of North Carolina said in a statement.

The other amendments that passed lower the cap on income tax rates; expand crime victims' rights and enshrine the right to hunt and fish.

The six amendments Republican lawmakers submitted to voters filled the vacuum of having no races for governor or U.S. Senate. Groups for or against the amendments raised well over $20 million, according to campaign finance reports.

Cooper, the Democratic Party and allied groups pushed to defeat all six.

The state GOP supported all six, but former Republican governors and the conservative Americans for Prosperity have come out against one or two individual amendments.

NC House Speaker Tim Moore, R-Cleveland and Senate Leader Phil Berger, R-Rockingham released a statement on the approval of four of the proposed amendments to the North Carolina Constitution:

"These were excellent proposals that drew strong bipartisan support to improve not only our state constitution, but the lives of millions of North Carolinians," Moore and Berger said. "The people of this state have made their preferences clear for a lower maximum tax, stronger rights for victims of crime, secure elections systems, and constitutional protections for fishermen and hunters who enjoy our outdoors."