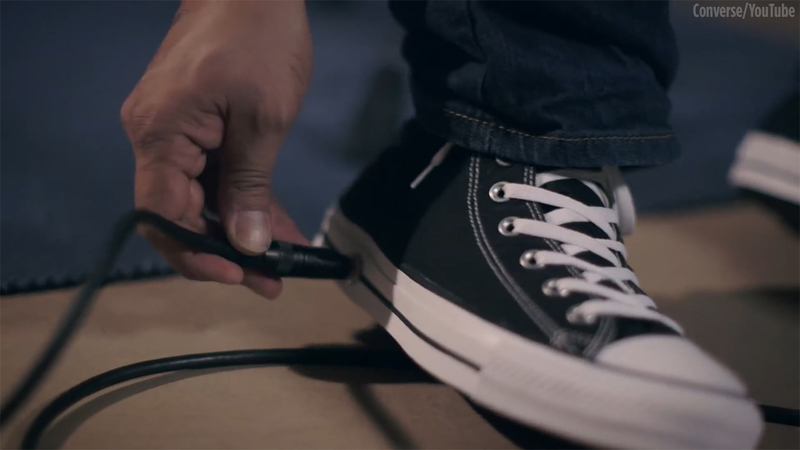 A sneaker with a wah-wah pedal built-in

Music artists now have a wearable tech of their own: sneakers with a built-in wah-wah foot pedal.

Converse Inc. just announced their global launch of the Chuck Taylor All Wah sneaker as part of their Chuck Hacks program, made possible by wearable technology brand CuteCircuit. The sneaker fuses the iconic Converse shoe design famously worn by many rock stars with the guitar modulation sound synonymous with the likes of Jimi Hendrix.

Stepping on a wah-wah pedal alters the tone of a guitar signal to produce a distinctive sound often heard in rock and funk music, making a sound reminiscent of a human voice singing "wah." The shoe works similarly like a wah-wah pedal, where flexing up and down produces the effect.

Only 13 guitarists were given a pair of All Wahs to test out, including J Mascis of Dinosaur Jr.

"Down makes it treblier and up makes it bassier," Mascis said in Converse's launch video. "It's just getting used to kind of a different motion, but it's definitely its own thing - I'll have to write some new songs with this."

The All Wah was originally conceived for the Chuck Hack program in 2013 when Critical Mass presented the first prototype of a Chuck Taylor with a built-in wah-wah pedal.