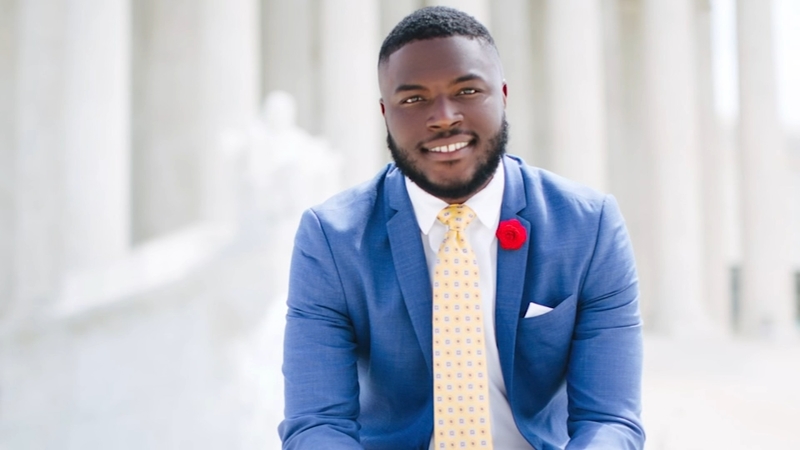 WAKE COUNTY, N.C. (WTVD) -- He was young, active, healthy and never got sick.

So when a young Wake County attorney came down with COVID-19, he was surprised at how hard it hit him and he had no idea that six weeks after he appeared to recover he'd be in the hospital fighting for his life.

"They basically came and told me exactly what my odds are for surviving, a 50% chance of living," said Chavez Adams.

Adams is just 29-years-old and the only factor that made him high-risk was the fact that he's African-American.

He was fit and healthy back in August when the Holly Springs man and his wife became infected. And since he's not one to get sick, he said he was surprised by his symptoms.

"I had a fever, I was coughing, I was super fatigued, had sinus effects. I could barely open my eyes. So those 14 days for me were pretty rough."

But after two weeks the couple figured they were in the clear. What they didn't know was that the worst was yet to come.

"A month and a half later, randomly, I got chills one Sunday night, and they were so uncontrollable," Adams recalled.

He was back and forth to an urgent care for the next several days and spiked fevers over 105. His X-rays revealed cloudy lungs which are often a lingering effect of COVID-19.

During a visit to WakeMed's emergency room in Apex, Adams said a nurse noticed his heart rate was 200, at least twice the normal range.

"When the doctors rushed in and did some more tests everybody was super alarmed that this is happening," Adams said, "And they did another X-ray. And they saw that my whole chest was filled with pneumonia."

They put him in an ambulance headed for WakeMed's main campus in Raleigh.

When he arrived, things were going downhill fast.

"My blood pressure bottomed out and they had to do an emergency procedure in the hallway, as I was going to my room. And all I remember from that time is all these doctors and nurses coming and trying to get me back stable," said Adams.

He was diagnosed with myocarditis or inflamed heart muscles.

The doctors believed it was a direct result of his coronavirus infection according to Adams. "Basically myocarditis is heart failure. And my lungs and my organs were shutting down due to this myocarditis."

He said things got fuzzy and the next thing he knew he was being rushed into surgery where doctors installed an Impella CP device, a tiny pump, to allow his inflamed heart muscles to rest.

His wife of just two years couldn't believe her husband came that close to death.

"He never gets sick," said Ashlea Carver. "And so seeing him like that, and then seeing things progress, even a month later was, you know, really strange and hard to deal with."

Thanks to the heart pump and quick action by his healthcare team, Adams was back at work in a week.

It was a remarkable recovery by all accounts.

So now he's trying to get the word out.

"I want everybody to kind of know that it's just not a 14 day quarantine and you're safe. It really has potentially lifelong implications," said Adams.

So while overall death rates for COVID-19 may be relatively low, even those in low risk categories can become critically ill.