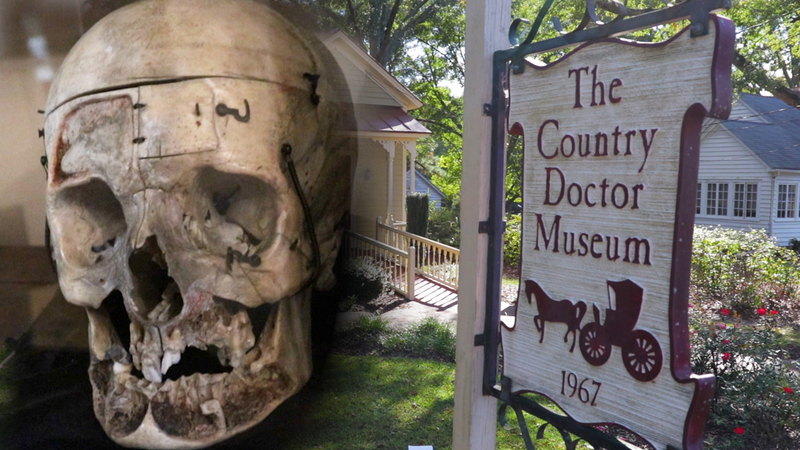 BAILEY, N.C. (WTVD) -- Bloodsucking leeches, illicit drugs and poisonous air can all be found in a few unassuming buildings in a small Nash County town.

The museum recently celebrated its 50th year of operation, but its true roots go back even farther.

In the early-to-mid 1900s, a few North Carolina doctors who practiced in rural parts of the state recognized that their way of life was changing. Being a physician had already undergone massive shifts, and those shifts were undoubtedly going to eliminate how they practiced medicine.

They and their families began collecting keepsakes and memorabilia from the profession. The idea was to create a sort of shrine to the country doctors who had worked their whole lives to serve their community as best they could.

In 1967, that shrine became the museum. In 2001, the founders of the museum gifted it to East Carolina University.

The history of medicine is disturbing and often gross. Remember, humans did not even know that germs caused diseases until the late 1800s.

The Country Doctor Museum is not dedicated to the entire history of medicine--because a museum that did that would be the size of Texas. Still, the history of rural medicine definitely hits many of the highlights in medical history.

At the Country Doctor Museum, you'll find find areas dedicated to the interesting things we tried in the name of medicine and your museum tour guide will be happy to explain how they all worked--or rather how they were supposed to have worked.

For example, bloodletting--a bizarre treatment that came from when humans thought disease was caused by an imbalance of your four humors (Blood, Yellow bile, Black bile, Phlegm).

Feeling ill? Perhaps that's because your liver has produced too much blood (yes liver). Great way to take care of that would be to let these leeches suck that excess blood right on out of there.

Leeches not your speed? No problem, place a small box-shaped device called a scarificator on your arm. In a jiffy several sharp blades will slice through your skin, to let out all that extra blood you've got inside causing all your health problems.

Moving away from the bloodletting section, you can try your hand at pill making! Country Doctor Museum tour guides regularly explain how rural doctors would mix up remedies and bind them into pill form way before your local pharmacy was packed aisle to aisle with child-proof bottles.

Three of those are patent medicines still sold today, the fourth is a patent medicine that was responsible for the deaths of a countless number of babies. But which one?

If you guessed Godfrey's Cordial, you win! That patent medicine contained opium and was commonly used by physicians and mothers to sedate or quiet babies.

Opium and alcohol were common ingredients in patent medicines, because they definitely did something to you when you took them.

Think about it: You take an antibiotic and get better; today you understand it's because the antibiotic fought off the bacteria in your system. Before you knew that bacteria was the cause of your illness, how would you know what made you better?

That question is what's behind the heroic era of medicine. The answer for people during that era was that medicine should do something to you--make you sweat, make you urinate, make you vomit, make you feel something different.

Throwing back shot after shot of opium-rich or alcohol-rich patent medicines sure would make you feel something. So it has to be working!

The Country Doctor Museum has a whole cabinet dedicated to some popular patent medicines used by rural doctors.

Then there's the sick room. See what rural doctors would have been working with when they made a house call to a particularly ill patient.

Miasma theory is that "bad air" was causing the problems. Somebody gets sick, they must've inhaled some bad air.

Honestly, this theory had its pluses. It at least got people to clear away decaying flesh or other rotten smelling things. For sanitation purposes alone, this may have accidentally helped some people.

But then again, strapping potpourri under your nose to prevent contracting the plague (which is spread by flea bites, by the way) isn't effective, like at all.

Admittedly, the medicine was not great. But then again, humans in the 22nd century will probably look back on many of the medicines we're using in the 21st century and think we were crazy.

You do the best you can with what you know and what you have at the time.

Country doctors stepped up and went to bat for their communities.

These physicians would step up to help patients suffering from the plague or smallpox or cholera or whatever without even knowing what caused it or how to protect themselves from getting it.

"A lot of country doctors saw their profession as a calling, almost as a ministry, to help the people in their community," Anderson said.

Country Doctor Museum tour guides can reel off story after story about rural North Carolina doctors: some accepted payments of food when families couldn't pay money, some went to great lengths to get life-saving vaccinations to all the children in their community, and some set aside months of their lives to treat a massive polio outbreak.

It's those stories and memories that inspired the creation of the museum and will ultimately leave a lasting impression on anyone who decides to venture into Bailey, North Carolina, and experience the Country Doctor Museum.