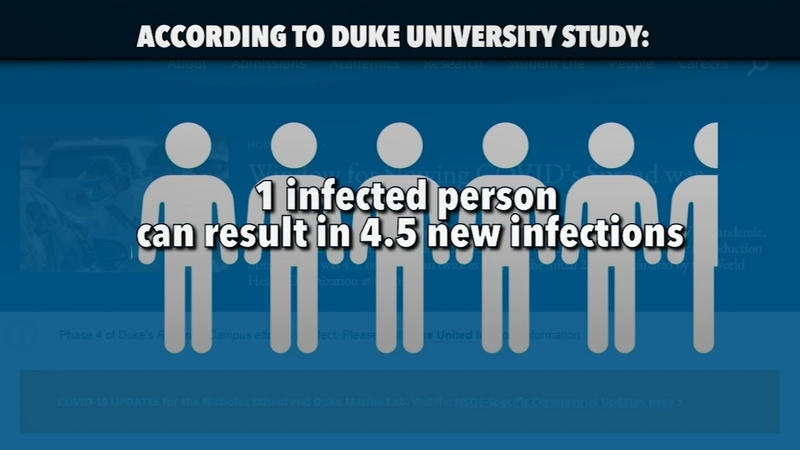 COVID-19 cases increasing rapidly in children across US, researchers find

Their study concluded that global governments had only 20 days to respond to the spread of the deadly virus using non-pharmaceutical options or interventions as treatment.

"These numbers confirm that we only had a small window of time to act, and unfortunately that's not what happened in most countries," said Gabriel Katul in a news release.

Furthermore, Katul and Mrad's study found that, globally, an infected person with COVID-19 on average infected 4.5 new persons, which was more than twice the 2.2 rate initially estimated by the World Health Organization, in areas "where early-phase intervention was insufficient or nonexistent."

STUDY: Brand new analysis led by @DukeU shows during the early months of the pandemic, people with #Covid19 on average infected 4.5 new people versus the initial 2.2 estimate published by the World Health Organization at the time. #ABC11 pic.twitter.com/ptIDqkup24

"Had we acted in the first week or two, and stopped the first few infections from spreading, we would not be dealing with the cases we are today," said Mrad. The United States recently surpassed 200,000 deaths as a result of the virus. Worldwide, the number tops 1 million. "Now it truly is just damage control," said Mrad.

Both argue Germany as an example of a country who responded with "effective intervention" prior to the virus crossing its borders.

DUKE COVID-19 STUDY: “Had we acted in the first week or two and stopped the first few infections from spreading, we would not be dealing with the cases we are today. Now it truly is just damage control.” - Duke grad student Assaad Mrad #ABC11 pic.twitter.com/Zi43zEbpqY

In late February, President Donald Trump said: "When you have 15 people, and the 15 within a couple of days is going to be down to close to zero, that's a pretty good job we've done."

Katul suggests that while social norms across the nearly five dozen countries is different, the intervention is what makes the most difference.