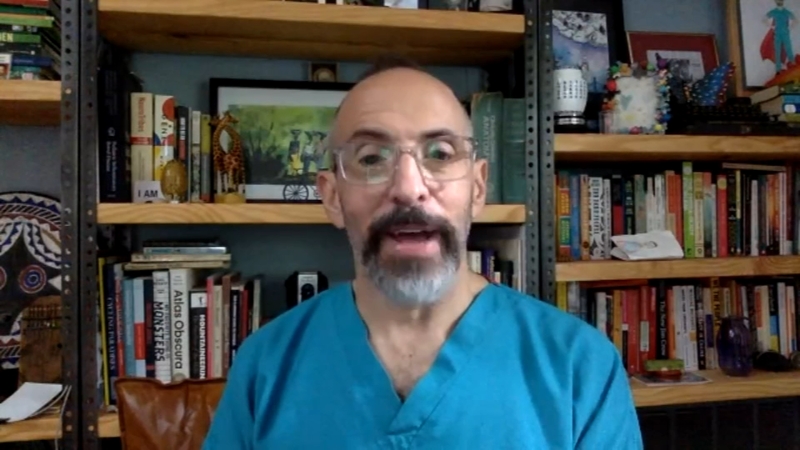 CHAPEL HILL, N.C. (WTVD) -- A new report from the Kaiser Family Foundation shows that the Delta variant pushed many hesitant Americans to get vaccinated.

According to the report, 35% of people who got vaccinated since June said the increase in cases caused by the Delta variant, concern about reports of local hospitalizations, or someone they know getting seriously ill or dying from COVID was one of the main reasons they got the shot.

Dr. David Wohl, a professor of medicine in the Department of Infectious Diseases at the University of North Carolina-Chapel Hill, said he's seen similar trends at home. When someone comes into the emergency room with a severe case of COVID, he said, they almost always want to get vaccinated immediately.

"I spoke with someone in the Emergency Room just a few days ago who was reluctant to get the vaccine, didn't want to get it, and now is very interested, on high levels of oxygen, to get vaccinated," Wohl said. "I've seen other patients as well. It's pretty much a similar story."

Wohl emphasized that for the most part, people in North Carolina and across the nation were excited to get the vaccine and did so willingly.

"The majority of people in this country believe that vaccines are good and important," Wohl said, adding that's echoed in the fact that many people brought their children to be vaccinated once they were eligible.

He noted that while incentives pushed people to get vaccinated initially, vaccine mandates for work and play got more people to roll up their sleeves this summer. However, vaccinations are slowing.

According to the latest North Carolina Department of Health and Human Services data, just 14,754 vaccine doses were reported in the last 24 hours--more than 8,000 of those doses were second shots. That means more people were getting vaccinated a month ago than they are now.

Wohl expressed his growing and palpable frustration at growing and seemingly impenetrable vaccine misinformation, trying to put the scope of the cost of remaining unvaccinated in perspective.

"We're already through waves of devastation," Wohl said. "Two thousand people are dying every day in the United States. You might say, that's 2,000 people, but do the math. That's 14,000 people a week. That means 28,000 people, 30,000 people every 2 weeks. Keep multiplying, We're talking tens of thousands of people."

He added that the situation in North Carolina hospitals is dire.

"If that's not motivating people, if that our hospitals here in NC have ICUs can't accept new patients because they're chock full of patients on ventilators due to COVID-19, that we're running out of (extracorporeal membrane oxygenation (ECMO)) machines because there's children on ECMO--which is a very last-ditch effort -- in NC that we're running out of these machines because largely folks with COVID are taking them up. If that won't motivate people to get vaccinated because of some theoretical risk of something happening years from now with these vaccines or misinformation about very very rare toxicity, I don't know what would," he said.

But Wohl added that he's encouraged by people who are 65 years old and older who have gotten vaccinated -- 90% have gotten at least one dose and 88% are fully vaccinated according to the latest numbers.

"They realized they have the most to lose because those are the people who were dying. They're not anymore. That's not who we're seeing in our ICUs," Wohl said.

Wohl also added that the vaccines have been given to half of the world's population.

"We know a lot about them, we have a lot of experience," he said.