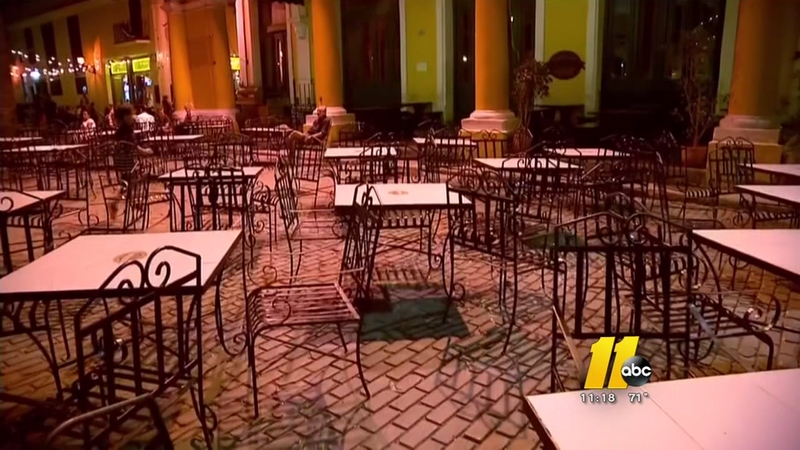 HAVANA, Cuba (WTVD) -- Vacationers on the inaugural flight between North Carolina and Cuba on Wednesday morning got a surprise in Havana. A part of Old Havana, famous for live street music, is silent Wednesday night, because of the official mourning period for Fidel Castro.

La Taberna de Pescador is a popular spot that's normally packed. But right now, it's limited in what it can serve.

When waiter Daniel Sanchez was asked whether it was possible to get a drink, he replied: "No alcohol. No alcohol. Nothing"

ABC11 caught up with a group of guys on a 1,000-mile bike trip across Cuba, who didn't know what to expect when they arrived.

"I was a little intrigued to find out how it was going to work as a tourist," said Teddy Young. "Would I get basic food at all, and it seems like that's happening, everyone is just chilling out basically."

Justin Grant, another tourist, said he wasn't too surprised about the state of things in Cuba.

"Not too surprised but a little disappointed, because I've heard so much about the music here," Grant said. "But at the same time, being able to share this with the people here is a really amazing time."

A delegation of North Carolina business people canceled seats on the inaugural flight because they heard so many things are shut down.

But the people who did make the trip are excited to be part of North Carolina history -- taking part in the very first commercial flight from our state to Cuba.

It's a special trip for the Arnas family.

WATCH: Steve's 6 p.m. report on why the flight was a special trip for the pilot
EMBED More News Videos

Our Steve Daniels was on the first commercial flight from NC to Cuba in this century.

What made Gavin Teekah book his spot on the inaugural flight?

"My better half," Teekah smiled. "She said she found it and let's go."

Charlotte is one of only 10 cities in the nation to offer commercial flights to the island nation.

Lynelle Vidale said she's excited just to be able to go there.

"To actually be able to go there, that's what I want to see, like what's been going on with Cuba all this time," Vidale said. "I'm just excited."

They're also looking forward to Cuban food, and they won't have to wait for a table.

As for the mood of the tourists, Sanchez, the waiter, said they're relaxed.

"They respect that (Castro) passed away. They understand what's happening," Sanchez said.

Life on the streets of Havana won't return to normal until Monday when the mourning period ends. Too late for many visitors here right now, who were hoping to see the "real" Cuba.

Still, they'll always be part of a historic moment.