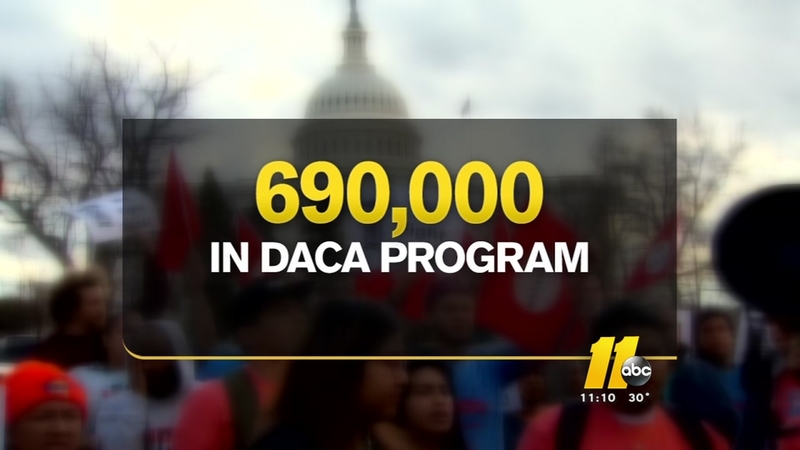 RALEIGH, NC (WTVD) -- DACA recipients in the Triangle reacted with cautious optimism to President Donald Trump's unveiling of a new immigration plan that offers a path to citizenship for nearly 2 million undocumented immigrants who came here as children.

"We're ready to compromise. I mean I've been fighting since 2010," said Viridiana Martinez. She and Cinthia Marroquin were both born in Mexico; live, work, and pay taxes in Raleigh; but their future in the U.S. hinges on what happens before the Trump administration's March 5 deadline for DACA to expire.

"It's not a perfect proposal but no proposal I think is perfect," said Marroquin." But I think that's something we can start working on it."

For immigration advocates who've been demanding a so-called "clean" Dream Act, the president's plan is not that.

"I'm furious at the fact that we cannot get just a Dream Act, just something that addresses dreamers," Martinez said.

The president also wants Congress to approve $25 billion in border security - including money for that controversial border wall.

But after years fighting a sometimes seemingly impossible battle, Martinez and Marroquin are now hanging their hopes on a compromise.

"As a taxpayer, I don't want to waste any money on a border wall," Martinez said. "But if that's what it's going to take for us to pass something, then we're willing to compromise."

North Carolina Sen. Thom Tillis, a Republican who has been active on immigration legislation, said he applauds the president for releasing "realistic framework" that includes policies supported by both parties.