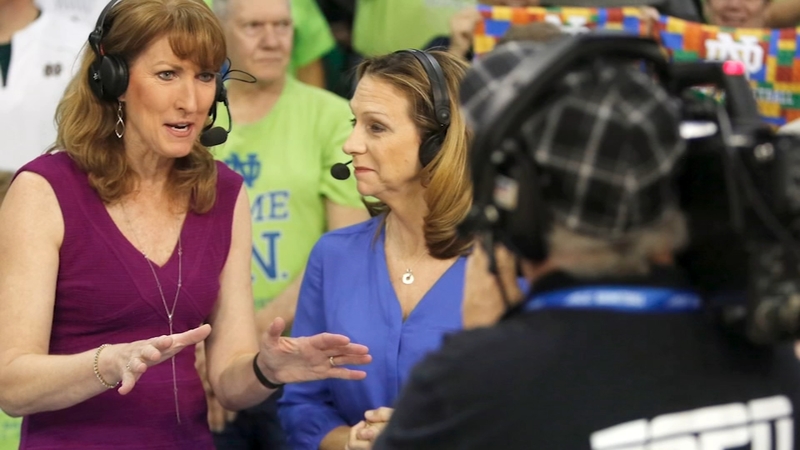 RALEIGH, N.C. (WTVD) -- On Friday, July 23, the North Carolina Sports Hall of Fame will induct 11 new members and one of those is former NC State basketball standout and Cary native Debbie Antonelli who said the honor is a reflection of all of the people around her.

Thirty-three years in broadcasting for both women's and men's basketball and a never-ending travel schedule has landed Debbie Antonelli a spot in the North Carolina Sports Hall of Fame -- a call she didn't see coming.

"It was kind of shocking and humbling," said Antonelli. "It's not something you ever set out in your career to think that is going to happen for you. Very humbled and very grateful. It's an incredible reflection of all the many people who have helped me along the way."

Antonelli was a three-year starter for the late Kay Yow and the Wolfpack -- helping lead NC State to an ACC Championship title in 1985.

RELATED: Fayetteville native to be inducted into NC Sports Hall of Fame

"A big part of my journey and path has been through NC State and Kay Yow's influence in my life in every aspect," Antonelli said. "When I was a little girl I just wanted to play and I didn't know these opportunities were available. It's so much different now for a 16 and 17-year-old little girl. There are so many more options for them out there."

Those many options are due in part to Antonelli continuing to break down walls for women in sports. In 2017, she became the first woman in 22 years to be a color analyst during the NCAA Men's Basketball Tournament.

"Having my three boys getting to experience this entire hall of fame with me and my husband is really important to me too," said Antonelli. "They only know one way, and that is you treat all people with respect and you certainly treat women with respect and my boys have grown up knowing that girls can do anything too."

She said being on the call for the NCAA men's basketball tournament is like the Super Bowl for her and she's nowhere close to being finished.

"Anytime any team is cutting down the nets I want to be there on the call,' she said. "At any level in basketball when you've been on a team yourself and you've experienced those things as a team you know how hard it is to get to the end. Cutting down the nets is always so symbolic of winning a championship and being there when the best events are happening. That's what I want to do in my career."