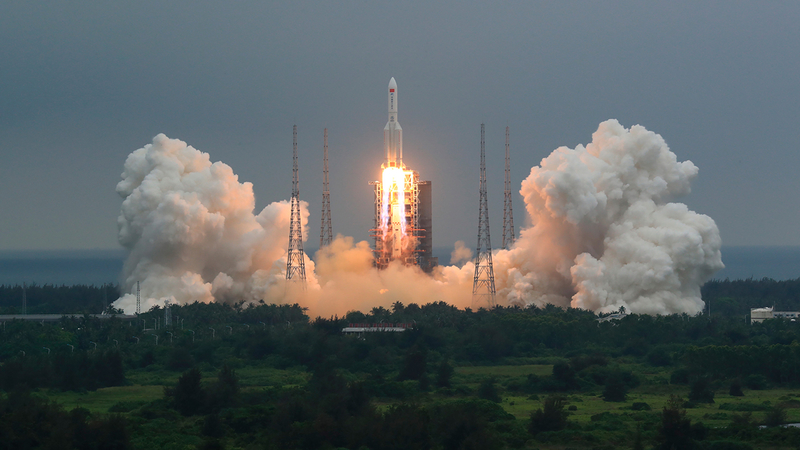 BEIJING -- The large Chinese rocket that is out of control and set to reenter Earth's atmosphere this weekend has brought about an alarming but not unprecedented situation.

Space debris has crashed into Earth on a number of occasions, including last year.

The good news is that debris plunging toward Earth -- while unnerving -- generally poses very little threat to personal safety. As Jonathan McDowell, an astrophysicist at the Astrophysics Center at Harvard University, told CNN: "This is not the end of days."
EMBED More News Videos

The good news is that debris plunging toward Earth -- while unnerving -- generally poses very little threat to personal safety.

Still, the episode has fueled fresh questions about space debris, uncontrolled reentry and what precautions might need to be taken, if any.

How often does uncontrolled space debris crash into Earth?

Most pieces will burn up in the Earth's atmosphere before having a chance to make an impact on the surface. But parts of larger objects, like rockets, can survive reentry and potentially reach populated areas.

Last year, one of the largest pieces of uncontrolled space debris ever passed directly over Los Angeles and Central Park in New York City before landing in the Atlantic Ocean.

Weighing in at nearly 20 tons, the debris -- an empty core stage from a Chinese rocket -- was the largest piece of space junk to fall uncontrolled back to Earth since 1991 and the fourth biggest ever.

The only larger pieces were from NASA's Skylab space station in 1979, Skylab's rocket stage in 1975 and the Soviet Union's Salyut 7 space station in 1991. The space shuttle Columbia from 2003 could be added to that list since NASA lost control of it on its descent back to Earth.

This doesn't happen more often because space agencies around the world have generally tried to avoid leaving big objects in orbit that have the potential to reenter Earth's atmosphere and that they cannot control.

"Norms have been established," McDowell said. "There's no international law or rule -- nothing specific -- but the practice of countries around the world has been: 'Yeah, for the bigger rockets, let's not leave our trash in orbit in this way.'"

The Chinese rocket set to enter Earth's atmosphere this weekend, however, is designed in a way that "leaves these big stages in low orbit," McDowell said.

"It's really not best practice compared to what other space agencies do. They go to quite fair lengths to avoid doing this."

How much debris is floating around in space?

Above us there is a cloud of more than 9,000 tons of space junk -- equivalent to the weight of 720 school buses.

This amounts to hundreds of thousands -- possibly millions -- of objects whirling around in orbit uncontrolled, including spent rocket boosters, dead satellites and detritus from military anti-satellite missile demonstrations.

The junk is heavily concentrated in areas of orbit closest to the Earth's surface. And, though it doesn't pose much of a risk to humans on the ground, it does threaten hoards of active satellites that provide all sorts of services, including tracking the weather, studying the Earth's climate and providing telecom services.

The debris also threatens the International Space Station, where crews of astronauts have lived since 2000 and which had to adjust its own orbit multiple times last year due to space debris.

"Just a few years ago, we had about a thousand working satellites in orbit, and now we have over 4,000," McDowell said. "We talk about the space age and we think about the 1960s, but this is really the space age starting now."

Complicating the problem is that space traffic experts still don't have a fully accurate map of the objects orbiting Earth.

Possible collisions are tracked using government and privately owned sensors on the ground that attempt to pinpoint exactly where everything is, but the process -- at least for now -- involves a lot of guesswork.

Is there any regulation in place?

The 1967 Outer Space Treaty, which remains the primary international document regulating activity in outer space, was agreed to at a time when only two governments were going to space.

Now that more countries and commercial companies are in the business of spaceflight, regulators are faced with a Catch-22: They don't want to create a lawless environment, but they're reticent to impose new rules for fear that other countries may become more dominant in space.

"Space is intrinsically global, right? A satellite passes over all the countries in the world in a few hours," McDowell said.

"And so having the US take a position, it's not going to solve things. You really need some kind of international space traffic management agency -- sort of like an air traffic control for space, but international."

When and where will the Chinese rocket reenter Earth's atmosphere?

The Chinese Long March 5B rocket is expected to enter Earth's atmosphere "around May 8," according to a statement from Defense Department spokesperson Mike Howard, who said the US Space Command is tracking the rocket's trajectory.

The rocket's "exact entry point into the Earth's atmosphere" can't be pinpointed until within hours of reentry, Howard said, but the 18th Space Control Squadron will provide daily updates on the rocket's location through the Space Track website.

McDowell explained that pinpointing where debris could be headed is almost impossible at this point because of the speed the rocket is traveling -- with even slight changes in circumstance drastically changing the trajectory.

"We expect it to reenter sometime between the eighth and 10th of May. And in that two-day period, it goes around the world 30 times. The thing is traveling at like 18,000 miles an hour. And so if you're an hour out at guessing when it comes down, you're 18,000 miles out in saying where."

Still, the ocean remains the safest bet for where the debris will land, he said, just because it takes up most of the Earth's surface.

White House press secretary Jen Psaki on Wednesday wouldn't say if the US would commit to calling on China to pay compensation in the event of damage caused by the rocket.

"We're not at this point -- we're certainly tracking its location through US Space Command, and hopefully that's not the outcome that we are working through," she told reporters.

"Let me first say that US Space Command is aware of and tracking the location of the Chinese Long March 5B in space, and obviously, the Space Command would have more specifics on that tracking and any additional details," Psaki said, adding that the US "is committed to addressing the risks of growing congestion due to space debris and growing activity in space, and we want to work with the international community to promote leadership and responsible space behaviors."

A Defense Department spokesman told CNN the US military is not considering a kinetic strike option to break up the rocket. The US has demonstrated the capability in the past to shoot down debris entering the atmosphere.

Pentagon press secretary John Kirby said Wednesday that Space Command is tracking the rocket but that it is "too soon to explore options about what, if anything, can be done about this until we have a better sense of where it's coming down."

"The risk that there will be some damage or that it would hit someone is pretty small -- not negligible, it could happen -- but the risk that it will hit you is incredibly tiny. And so I would not lose one second of sleep over this on a personal threat basis," he said.

"There are much bigger things to worry about."