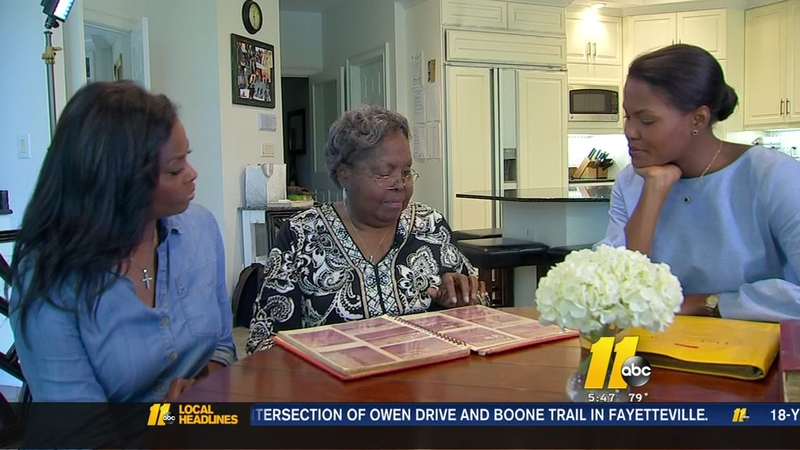 RALEIGH, North Carolina (WTVD) -- Genealogical testing is the second most popular hobby in the United States and with new companies popping up almost every day, curiosity is reaching peak levels.

ABC11's Tisha Powell and Steve Daniels wanted to unearth the secrets of their pasts, here's what Tisha found.

Family photos can tell a colorful story of where I came from. Images of my parents, grandparents, and great-grandparents, but what about the many others whose names and faces are unknown?

My mom remembers some of what she was told by her father about our family history.

"On daddy's side of the family, daddy said his grandfather was Chinese," Brenda Powell said. "I know his mother was very, very fair with long, long hair."

That would give me Asian ancestry, so I wasn't surprised when it showed up in my DNA test results.

He was there to help guide me through my test results which can be a bit complex and confusing.

His findings were news that came as a bit of a surprise to my mom.

"Even if the stories that were told in the family are one thing, it might reveal that there's ancestry from some other part of the world," Berg said. "That can be startling to some people, but I would say the predictions based on the genetics are probably fairly accurate."

Proof of our multi-cultural ancestry is represented in pink, blue, and yellow

ABC11's Steve Daniels and I also requested information about our health and what conditions may lie ahead.

"What they've done here is they've looked for two specific variants in this gene called SERPINA-1," Berg said. "That gene has been linked to the Alpha-1 Antitrypsin condition that can lead to emphysema and liver cirrhosis."

According to my test results, I am a carrier for this condition but may never develop any symptoms.

"It's a bit like being a sickle cell trait carrier," he explained. "You don't develop the disease, but you could potentially pass it on."

However, the test did not detect a disease that is being passed on in my family. It's a genetic eye disease called Fuchs Dystrophy that my mother believes she inherited from her grandmother.

"As long as I can remember she was blind," Brenda said. "I don't know if she ever saw me."

After three unsuccessful corneal transplants, my mother lost sight in her left eye and worries about the vision in her right.

"I want to be able to see my grandkids," Brenda said.

Enjoying a relaxing #MothersDay. Wishing the same for all moms. pic.twitter.com/8b3ZsUwBLp

It's too late to save my mother's eye, but now that I know more about this genetic condition affecting the women in my family, I can work to save not only my own sight but my two daughters' sight as well.