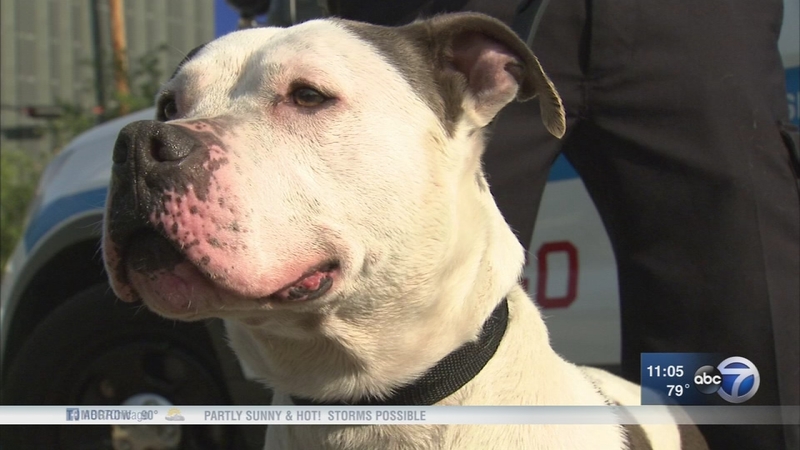 CHICAGO -- A dog fell into Lake Michigan Tuesday morning and struggled to get back up onto land. Luckily, a Chicago police officer got there just in time. But now police need help finding his owner.

Chopper 7HD was over a crash involving four vehicles in the 600-block of North Lake Shore Drive in Chicago's Streeterville neighborhood when the crew spotted an animal near the lakefront around 7:10 a.m.

Police had responded to the chain-reaction crash around 6:30 a.m. A Toyota Camry swerved in front of a GMC Terrain, which hit a Chevy Malibu, which hit a Dodge Durango. A person who jumped out of the Toyota and ran from the scene was detained, police said. The people inside the Terrain and Malibu were transported to Northwestern Memorial Hospital for treatment. Their conditions are unknown, police said.

Police believe the dog ran out of one of the vehicles and toward the lake. When the helicopter crew noticed the animal, he was lapping at the water, leaning over the concrete. When the dog leaned a little too far, he fell into the lake. He started to paddle, but couldn't manage to get his paws back onto the concrete.

Probationary Police Officer Juan Farris, one of the officers who had responded to the crash, ran over, got down on the ground and pulled the dog out of the water.

"He just kept running back and forth, was pretty excited. Kept trying to get water out of the lake and fell into the lake. I heard the splash. Once I heard, I turned over, I saw him swimming, just went over there and grabbed him. I was hoping he didn't get too far, because it would've been quite the battle if I had to jump in," said Farris, who graduated from the police academy six weeks ago.

Once the dog was safe, Farris, Field Training Officer Daniel Guzman and other officers tried to wrangle him so he wouldn't run into traffic. Farris patiently approached the dog, allowing other officers to get a leash on him. When the dog wouldn't jump over the barrier wall, Farris coaxed the animal with water and easily put him in the squad car, safe and sound.

"This is actually my first dog rescue that I've been in. We have taken some dogs to the animal control that are loose, but not one that we've actually had to rescue out of the water. As I witnessed this, I was just hoping that Farris wouldn't fall in," Guzman said.

Farris and Guzman brought the dog to the 18th District. They described him as a good dog, a cooperative dog, who didn't have a collar or chip. Police are trying to locate the owner.