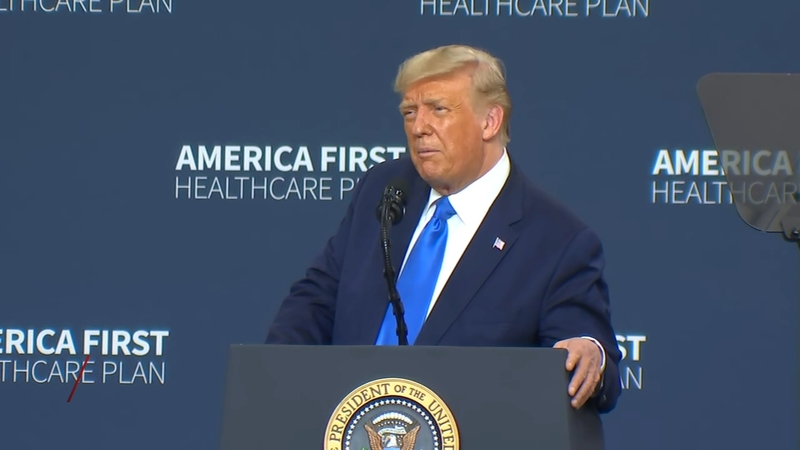 CHARLOTTE, N.C. -- During a Charlotte, N.C. event on Thursday, President Donald Trump announced an executive order on preexisting medical conditions, amid a global pandemic and growing uncertainty about the future of protections guaranteed by the Obama-era health law his administration is still trying to overturn.

"Under the America First Healthcare Plan, we will ensure the highest standard of care anywhere in the world, cutting edge treatment, state-of-the-art medicine and ground-breaking cures and true health security for you and your loved ones," Trump said. "We will do it rapidly, and it's in very good order and some of it has already been implemented."

The president sketched out what aides called a "vision" for quality health care at affordable prices, with lower prescription drug costs, more consumer choice and greater transparency. Aside from protecting people with preexisting conditions, he also said he plans to try to end surprise medical bills.

"The days of ripping off American patients are over," he said.

During a call with reporters, Health and Human Services Secretary Alex Azar called the Affordable Care Act, a "fallacy" and said the executive orders would protect patients if the Supreme Court strikes down the act.

The clock has all but run out in Congress for major legislation on lowering drug costs or ending surprise bills, much less replacing the Affordable Care Act, or "Obamacare."

Bill-signing ceremonies on prescription drugs and medical charges were once seen as achievable goals for Trump before the election. No longer.

RELATED: Trump declines to commit to peaceful transfer of power after 2020 presidential election

"So, after 20 years of national public policy debate and hard-fought congressional and presidential approval, how does Trump conclude he can restore these protections, should the Republican Supreme Court suit overturn them, with a simple executive order?"

Prescription drug inflation has stabilized when generics are factored in, but the dramatic price rollbacks he once teased have not materialized.

And the number of uninsured Americans had started edging up even before job losses in the economic shutdown to try to contain the coronavirus pandemic. Various studies have tried to estimate the additional coverage losses this year, but the most authoritative government statistics have a long time lag. Larry Levitt of the nonpartisan Kaiser Family Foundation says his best guess is "several million."

Meanwhile, Trump is pressing the Supreme Court to invalidate the entire Obama health law, which provides coverage to more than 20 million people and protects Americans with medical problems from insurance discrimination. The case will be argued a week after Election Day.

The death of Supreme Court Justice Ruth Bader Ginsburg has added another layer of uncertainty. Without Ginsburg, there's no longer a majority of five justices who previously had voted to uphold the ACA.

Democrats, unable to slow the Republican march to Senate confirmation of a replacement for Ginsburg, are ramping up their election-year health care messaging. It's a strategy that helped them win the House in 2018. Former Vice President Joe Biden has said he wants to expand the Obama law, and add a new public program as an option.

A recent Kaiser Foundation poll found Biden had an edge over Trump among registered voters as the candidate with the better approach on making sure everyone has access to health care and insurance, 52% to 40%. The gap narrowed for lowering costs of health care: 48% named Biden, while 42% picked Trump.

Thursday's rally marked Trump's 14th visit to North Carolina, a battleground state for the Nov. 3 election. His challenger, Biden, visited the Queen City on Wednesday--his first trip to the state since securing the party's nomination.

Despite repeatedly promising to release a health care proposal, President Trump has never offered a plan of his own. Instead, he cheered on attempts by Congressional Republicans to rip health care away from more than 20 million Americans, and sides with Republicans in North Carolina who stand in the way of expanding Medicaid coverage to more than 700,000 North Carolinians. During a pandemic that has infected nearly 200,000 North Carolinians and cost 3,300 lives in the state, President Trump is currently trying to get the U.S. Supreme Court to take us back to the days where as many as 4.1 million North Carolinians with preexisting conditions could be charged more or denied health care coverage entirely. If President Trump succeeds, he will also increase prescription drug costs for many seniors, and eliminate their access to free recommended preventive services, including vaccines.

As President, I will bring people together to protect and build on the Affordable Care Act, lower health care costs for working families and seniors, and ensure that all Americans have access to the quality, affordable coverage they deserve.