'My jaw hit the ground:' Seminary president's visit with the Rev. Billy Graham 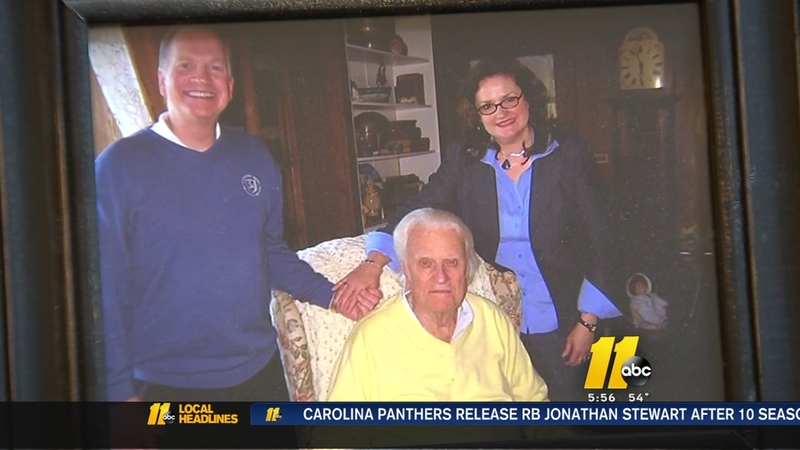 Reflections on the Rev. Billy Graham

The Southeastern Baptist Theological Seminary president said Graham graduated from the school before his tenure. Pointing to the phone in his office on the school's campus in Wake Forest, Akin responded to Will's invitation to meet his father: "Yeah, I'd like to meet your granddaddy! We gonna go tomorrow?"

The grandson responded by telling Akin the in-home visit would take some time to set up and could be canceled if Graham was under the weather.

Akin and his wife found themselves on I-40 west headed to Montreat.

"I was on pins and needles that day," Akin said. "And I'm just thinking, 'please Lord don't let (Rev. Graham) begin to feel bad. Because it might not ever happen."

Earlier I sat down with Dr. Danny Akin, president of @SEBTS, about his time with Rev. Billy Graham and his thoughts ahead of Friday’s funeral. Find out more today on Eyewitness News. #ABC11 pic.twitter.com/kuznHPiS7g

The trip would continue without a hitch and Akin and his wife found themselves on a fairly secluded property belonging to Graham.

Akin said Graham came into the room in a wheelchair.

Akin introduced himself to Graham: "I'm the president of Southeastern Baptist Theological Seminary and it's a great honor to meet you."

"Yes," Graham replied, "You're the president of that seminary that turned its back on me when I was on campus."

"My jaw hit the ground," Akin recalled. Akin said he told Graham he had never visited the campus during his tenure. That's when Akin learned that Graham visited SEBTS in 1988 when Lewis Drummond was brought in as president of the seminary.

As Graham and Drummond walked to the school's chapel, Akin said, students lined the sidewalk and turned their backs in protest.

"The faculty sat in the choir loft and folded their arms. They didn't move," Akin said.

"There are not many people who have made the impact for good in our country and around the world that Dr. Graham has in so many ways," Akin said as he thought about Graham lying in honor at the U.S. Capitol rotunda. "I'm honored to have the chance to go (to Graham's funeral). Secondly, I think it will be a time of great celebration. We're sad, but we're much more happy than we are sad. There's much more of a spirit of celebration and joy than there is a spirit of disappointment."

'Daddy Bill' as he was affectionately called by his family, Akin said, "...is in a wonderful place he will be in for all of eternity."

Graham oftentimes would remark about seeing Jesus and being reunited with his wife, Ruth, Akin said.

As Akin's time with Graham came to a close during their 2007 visit, "I went with high expectations and the time I went superseded any kind of hope. I kept trying to get him to talk about himself. He wouldn't do it. He wanted to talk about the good Lord Jesus or talk about his wife."