Duke celebrates a big win to tip off the ACC Tournament on Tuesday. (Gerry Broome)

No team has won five ACC Tournament games in five days - but Duke (12-11) likely must do so to avoid missing the NCAA tournament for the first time since 1995.

Steward, Williams and Jeremy Roach - all freshmen - combined for 27 of Duke's 41 first-half points. Steward scored 13 points with three of Duke's eight 3-pointers and Williams was 5 of 6 from the field for 11 points. 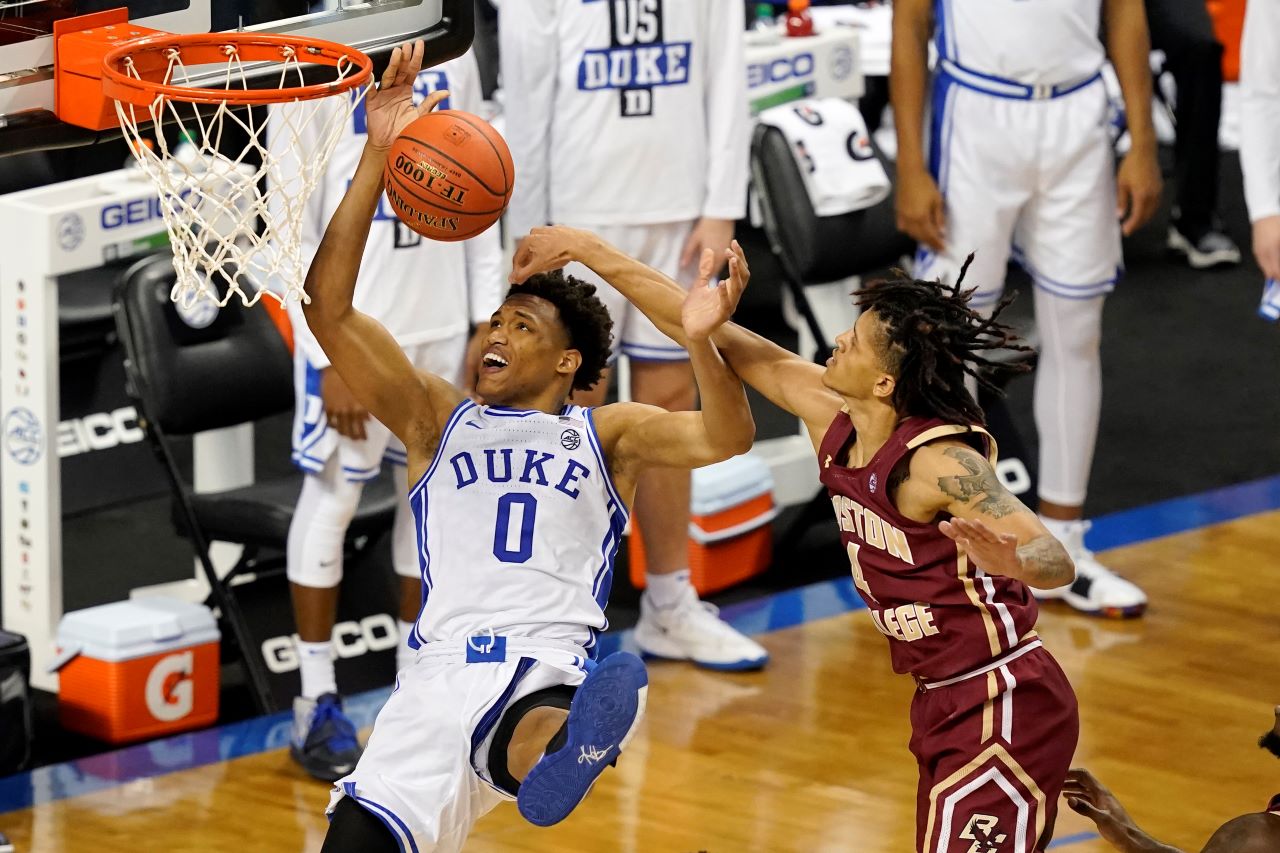 Jordan Goldwire closed the first half with a 3-pointer, and he made 3-pointers on back-to-back possessions, capping an 11-2 run, to give Duke a 22-point lead with 12:31 remaining.

The Blue Devils, starting the tournament with their lowest seed ever, made six of their first 10 3-pointers and finished with a season-high 15, while 15th-seed Boston College was just 1 of 15. Duke had 17 2-point baskets en route to posting its second-largest margin of victory in an ACC tourney game.

Fans said they are happy to return to the ACC Tournament, which got underway Tuesday. Mark Armstrong reports from Greensboro.

Goldwire, a senior, scored 12 points on a career-high four 3-pointers for Duke, which snapped a three-game skid. The Blue Devils advance to play No. 7 Louisville on Wednesday at 6:30 p.m., looking to stop a three-game losing streak in the series. The Cardinals won 70-65 on Jan. 23, and 80-73 in overtime on Feb. 27 to spoil Matthew Hurt's 37-point performance.

Boston College (4-16), under interim head coach Scott Spinelli, did not have a player score in double figures after shooting just 39.1%. Makai Ashton-Langford had nine points and DeMarr Langford and James Karnik each added eight.

Duke has won 16 of the last 17 meetings between the schools, including an 83-82 win at Cameron Indoor Stadium earlier this season. BC's CJ Felder scored a career-high 24 points in that contest but was held to just four points on 2-of-8 shooting in the Tournament.

Isaiah Wong scored 20 points to lead five Miami starters in double figures as the Hurricanes beat Pittsburgh 79-73 on Tuesday in the opening game of the Atlantic Coast Conference Tournament.

Nysier Brooks converted a three-point play with 53.8 seconds left - his only points of the half - to cap a 9-0 run for a three-possession lead at 73-66. Wong added four free throws in the final 29 seconds to seal it as Miami made 22 of 28 at the stripe compared to 5-of-14 shooting for Pitt.

Pitt also turned it over 14 times, leading to 22 Miami points. 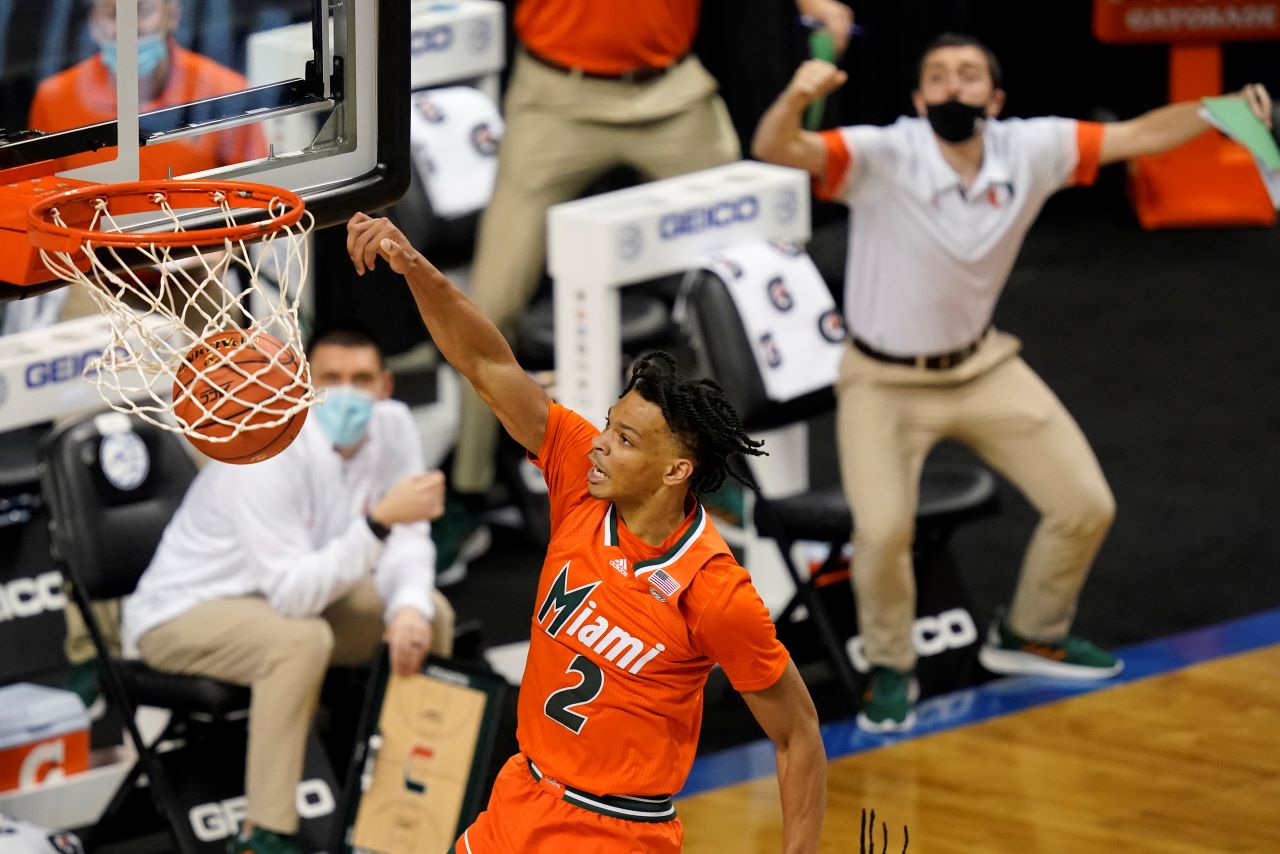 Miami guard Isaiah Wong slams home a dunk during the second half against Pittsburgh on Tuesday.

Anthony Walker had 14 points and nine rebounds, and Elijah Olaniyi and Kameron McGusty each added 14 points for Miami (9-16). Brooks finished with 12 points and Wong reached 20-plus for an ACC-leading 10th time this season.

No. 13 seed Miami, which played a league-high 19 games of a 20-game conference slate, advances to face No. 5 seed Clemson on Wednesday. The Hurricanes are winless in two meetings with the Tigers this season, dropping a 66-65 contest on Jan. 2 and 66-58 on Feb. 27. Clemson's leading scorer Aamir Simms had 25 and 19 points in those two games.

Freshman Femi Odukale scored a career-high 28 points on 11-of-16 shooting for Pittsburgh (10-12). Nike Sibande added 24 points and Justin Champagnie had 11 points and 10 rebounds.

Champagnie, who received two votes for ACC player of the year behind Georgia Tech senior Moses Wright's 10, struggled from the field making just 5 of 20 shots.

Champagnie grabbed his own miss and put it in for a four-point Pitt possession and a two-point lead (66-64) with 3:36 left. It was his first basket since 8:36 left in the first half. The Panthers didn't score again until Champagnie's dunk with 44 seconds left. 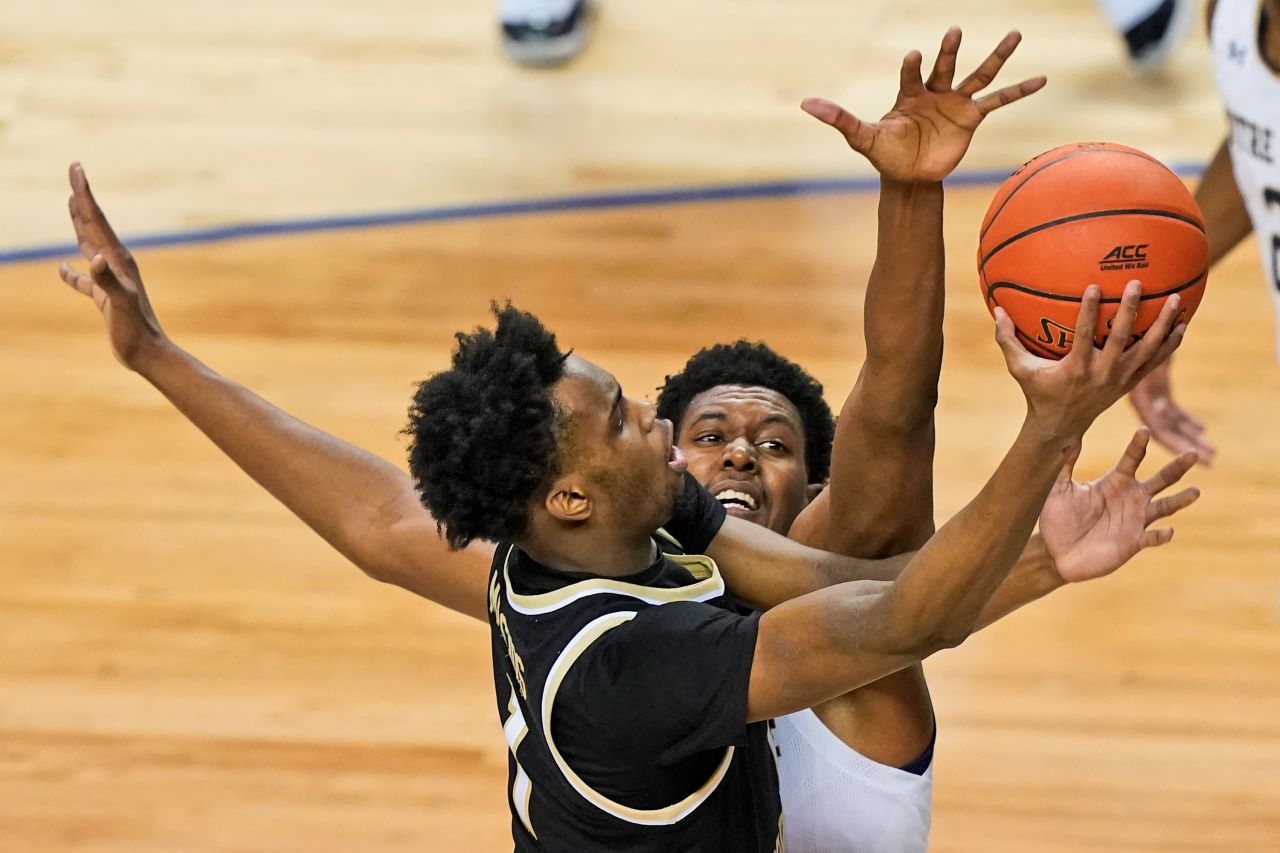 The Irish (11-14) went on a 14-0 run to tie the game at 75, then a couple of possessions later, the Demon Deacons had a chance for a final shot but turned the ball over. Notre Dame quickly pushed the ball up court and in a play similar to the Villanova buzzer-beater that sank North Carolina in the 2016 NCAA championship game, Wertz caught a pass in stride and nailed the shot as time expired.

Wake Forest started the game strong and led by double digits much of the way but went cold down the stretch. The Deacs finish the season 6-16.