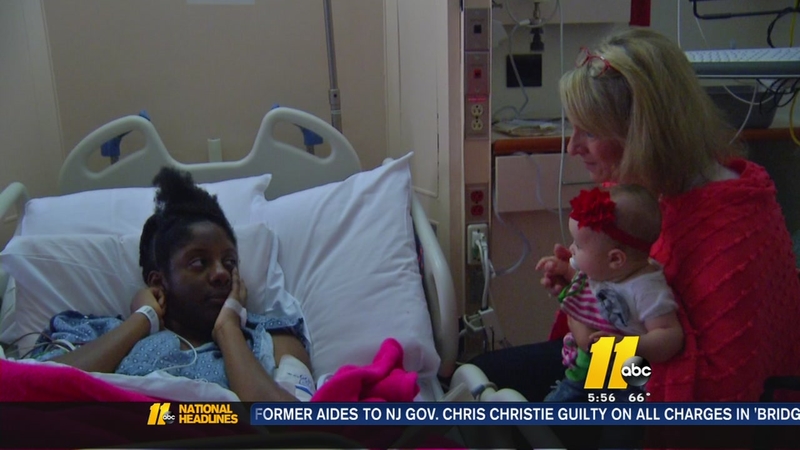 DURHAM, NC (WTVD) -- The Durham County Sheriff's Office is coming to the aid of a woman who just underwent brain surgery at Duke University Hospital.

The 20-year-old and her mother were living in a U-Haul van, but that changed when the Sheriff's wife heard their story.

Alexandria Thompson, a gifted college student who speaks multiple languages, suffers from seizures that are so bad they would force her mind to switch to Spanish.

The seizures couldn't be controlled with medication and forced doctors to operate, map her brain with electrodes, figure out where it stores the information for those languages and remove part of it in an effort to save her speaking abilities and her life.

"I was always scared," her mother, Marcella Thompson, said. "I've been scared for three years."

"The seizures were coming from the very tip of her temporal lobe," said Aatif Husain, Alexandria's neurologist and epileptologist at Duke.

"The black is the area of the brain we took out and we preserved all her speech sides back here," Michael Haglund, a professor of neurosurgery, neurobiology and neuro health at Duke, said while said pointing to pictures of the young woman's brain.

Alexandria's condition was so financially draining, that she and her mom ended up homeless - until a chance meeting between Marcella Thompson and Pam Andrews, the wife of Sheriff Michael Andrews, in a hospital waiting room.

The two bonded over Thompson's Bible and Pam Andrew's grandbaby. That's when Pam Andrews found out they didn't even have enough money for a meal.

"Honestly, I reached into my purse and dug out the last bit of cash I had on me and said please take her to lunch," Andrews recalled.

"I took her to Chick-Fil-A and she got the milkshake, the lemonade and the sandwich and she was so happy," Thompson said.

But it didn't stop there, Pam shared the story with her husband, and the sheriff's office and the community helped the family find housing in a townhome and raised money for food.

"Being a part of community service and then being engaged, involved in your community, is a vital aspect of what you do," Sheriff Andrews said.

"It just takes a little to save someone's life, and that's really what they did for me and my daughter," Thompson said.

"I want to see her prosper. I want to see her love for education continue," Pam Andrews said, "and inspire others that, you know, when a curveball comes your way you can still overcome it."

Thompson said she felt it was her faith that drew her and the sheriff's wife together into conversation about her daughter, and she couldn't be more grateful for the department's help during the biggest time of need in her life.