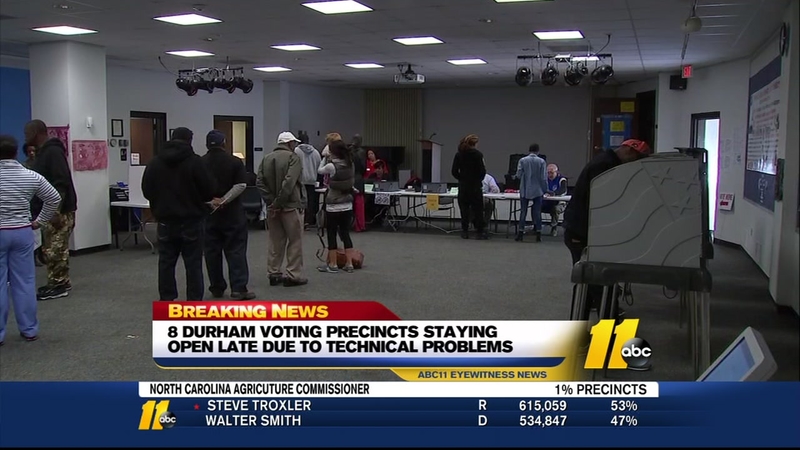 DURHAM (WTVD) -- The State Board of Elections voted to extend voting hours in eight Durham County locations after an emergency meeting. The meeting was called due to requests following a technical error that caused long lines Tuesday.

Bethesda Ruritan Club and Cole Mill Road Church of Christ were extended for up to 60 minutes. The other 6 locations were extended depending on how long they were delayed.

Voting extended at Creekside Elementary by 45 minutes ; Forest Hills Clubhouse by 30 minutes and Greater Emmanuel Temple of Grace by 30 min

Both the Durham County Board of Elections and the Southern Coalition for Social Justice asked for extended hours.

The Durham County BOE asked for additional time at 8 locations, despite earlier reports where officials said it was only one location or all precincts.

The Southern Coalition for Social Justice sued for an extra 90 minutes at all locations.

The requests came after election officials said earlier Tuesday that technical issues at the Bethesda Ruritan Club were preventing precinct workers from electronically checking in voters. Workers switched to using printed voter lists. Delays were reported to be up to 2 hours for voters.

Director Kate Cosner said the problem will not affect any votes, just the wait times.
Officials said printed voter registration lists were already delivered to each polling place as a backup.

Congressman David Price said Tuesday night after the announcement that it was "the right decision."

"I requested it, I'm sure along with others, because of the difficulties there that voters encountered," he said.

At a news conference Tuesday afternoon, the North Carolina NAACP said it wants a full explanation of how it happened.

Congressman G.K. Butterfield, who represents Durham, said "the people of Durham were deprived of nearly two hours of voting time because of these malfunctions."

In a statement issued before the announcement, the North Carolina Republican Party said the is no justification for an extension.