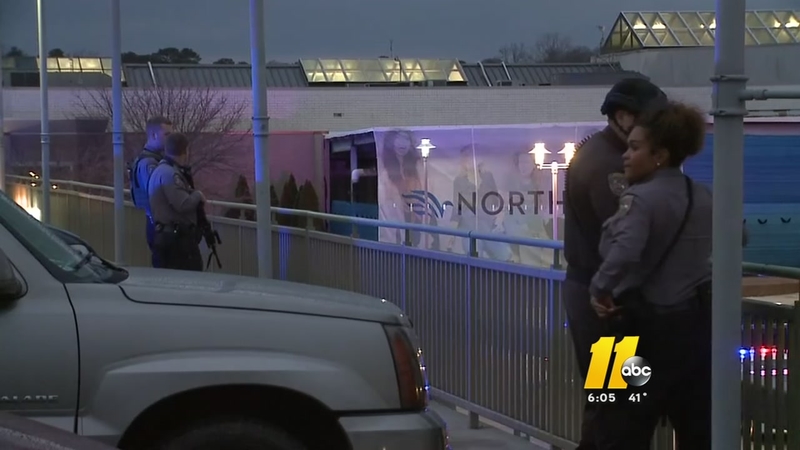 Caller: I heard gunshots and I saw people running past through the store. And they were running away from the movie theater.

Caller: I still see people outside but I'm not going out there.

Operator: Did you see the person that fired the shot?

On Wednesday, Durham Police told ABC11 that the victim was targeted following an argument with the shooter.

The bullet grazed the woman's head, leaving her with injuries to her face.

She was released from the hospital the same day of the attack.

"We are glad the shooting was contained immediately," Northgate Mall said Wednesday in a statement to ABC11. "There was no active shooter. It was isolated to that one location. We're glad no one else was hurt. We're sorry it hurt the holiday spirit. These incidents can happen at any place at any time."

Police are still looking for the shooter.

On Wednesday, the attack is renewing calls for peace from anti-violence group Bull City United.

Starting Monday, January 1, the group will be holding a week's worth of vigils and ceremonies to encourage nonviolence and unity throughout some of Durham's most dangerous communities.

"Everybody should think before they act," said David Johnson with Bull City United. "Everything doesn't call for violence. You can settle conflicts in a different way."

Since January, more than 230 people have been injured by gunfire in Durham, according to police.

The agency says homicides have been cut in half. In 2016, DPD investigated 42 homicides. This year, that number is down to 21.

Bull City United said its outreach in the community - focusing on at-risk youth - has helped contribute to the drop in crime.

"We believe that together we can decrease the level of violence, raise awareness of BCU activities and save lives in Durham. Initiating this countywide ceasefire of violence cannot be underestimated," said Doral Clayton, supervisor for Bull City United.