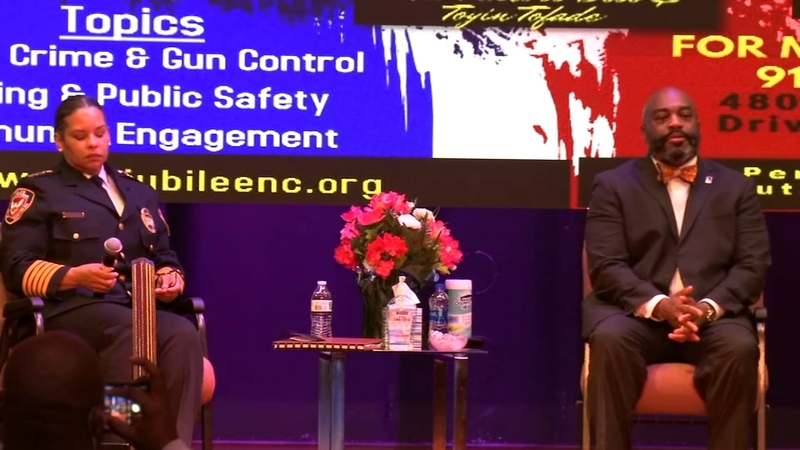 DURHAM, N.C. (WTVD) -- Durham's top two faces in law and justice, the police chief and the district attorney took questions Wednesday night from residents in a city that is increasingly anxious about the rise in gun violence.

At Jubilee Christian Church International in Durham, Chief of Police Patrice Andrews walked into a sanctuary filled with praise and worship. But when the music stopped, the tough conversation started.

"I heard someone say, recently, that it's as though we're a city under siege," the moderator told the chief at this town hall about Durham's fast-rising rate of gun crime.

One of the first questions to the chief: Who's doing the shooting?

"The folks that we have identified that are committing these crimes, they grew up here in Durham," Andrews said. "They are not representative of who we are as one Durham. But they are representative of a system that is not working well for them."

Jubilee's pastor, Bisi Tofade, leads this congregation, which he said was already distressed and anxious over COVID-19. And now is increasingly concerned about crime

"We feel that the church must provide information of what can we do to partner with the police to support our community," Tofade told ABC11.

Seated next to Andrews on stage was Durham Mayor Pro-tem Mark-Anthony Middleton. At one point, he pointed to the city's widening wealth gap as a major source of concern amid the rising gun crime.

"We have a lot of folks who see these new buildings going up -- who can't work in them; can't afford to live in them; who walk past them and say, is this my home? It's two Durhams," Middleton said.

The opioid epidemic was a big topic. Deberry outlined her office's commitment to drug diversion programs for users while getting tougher on drug dealers.

The district attorney gave residents an update on her office's post-arrest diversion program for people who commit low-level offenses, including drug use or possession: So far, 27 people so far have gone through the program; Only one person has been unsuccessful, thus far.

She said her top priority is gun violence.