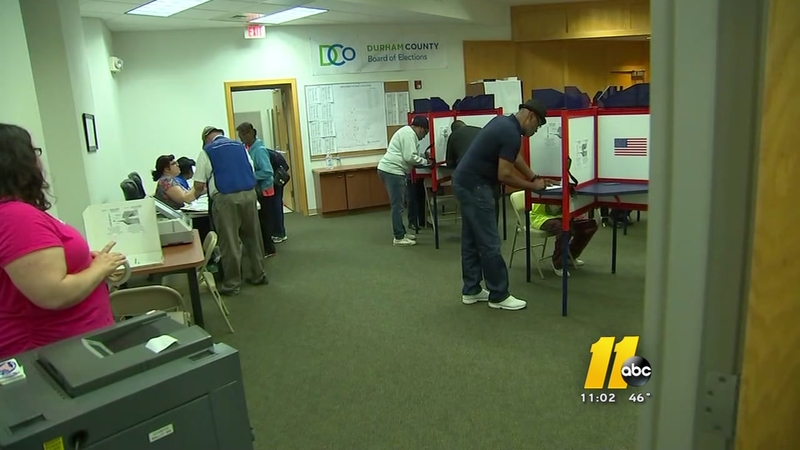 DURHAM (WTVD) -- The Durham County Board of Elections issued a statement Sunday night on the Election Day issues that led to the manual entry of over 94,000 ballots as well as 8 precincts having extended voting hours.

The general counsel for the state Republican Party filed a formal complaint in North Carolina's tight governor's race demanding the recount of those ballots. The complaint said the ballots were entered with "bleary eyes and tired hands."

The Durham County Board of Elections defended itself in their statement, saying they "acted in accordance with all applicable state and federal law in the course of this process."

In the statement, they said that at 7:30 p.m. Tuesday, they began tabulating the results of early voting and approved absentee ballots.

They said it took place where all members of the Durham BOE were present as well as observers from the state and both political parties.

Officials printed result tapes, verified them, and the ballot count information was downloaded to computer memory cards. The memory cards were then uploaded into the State Board's computer system.

Data from five of the cards was not able to be uploaded. Officials said they decided those results would be manually entered using a bipartisan team, under the supervision of the State Board representative.

They said they decided to wait to manually enter those results so as not to delay the uploading of ballots from the other precincts.

During the process, another card malfunctioned and it was added to the other 5, resulting in 6 cards needing to be entered.

At 10 p.m. officials said the bipartisan team began the manual entry under supervision from the State BOE, the chairman of the Durham County BOE, and an assistant Durham County Attorney. It took about an hour and a half.

According to the Durham County BOE, the data report was compared to the data on the result tapes.

They said they have "done [their] best to make this process transparent so that the citizens of Durham and the state of North Carolina can have confidence that the 2016 election administration process in Durham County was fair, impartial and bi-partisan."

The top lawyer for Gov. Pat McCrory said what happened in Durham County is "extremely troubling and no citizen can have confidence in the results at this point in time."

Roy Cooper campaign spokesman Jamal Little described the GOP claims of "malfeasance" in the tabulations as "a desperate attempt by the McCrory campaign to overturn results of an election they have lost."

The statement by the Durham County BOE also went into detail on what caused 8 Durham precincts to have extended hours. The longest extension was caused by a delay due to having to switch to paper ballots and running out of supplies.