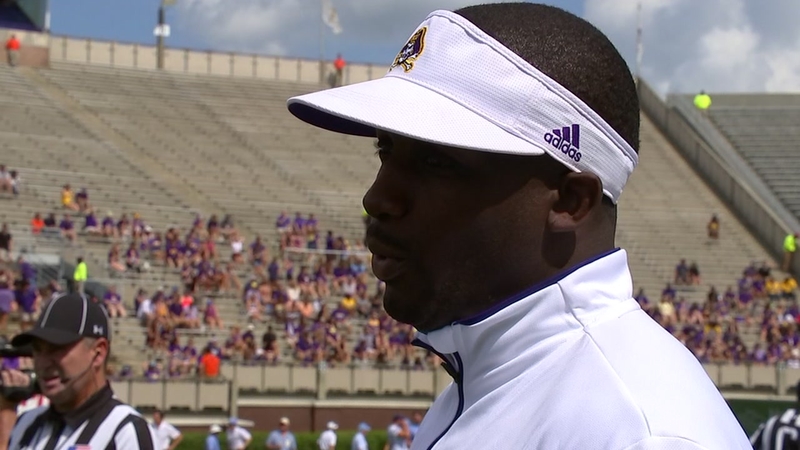 Chancellor Cecil Staton announced the dismissal two days before the Pirates complete their season at North Carolina State on Saturday. Defensive coordinator David Blackwell will be the interim head coach for that game and during the transition.

Montgomery went just 9-26 with a 4-20 record in American Athletic Conference play. He lost six of his final seven games. It's the least successful three-year period for the school since it won just eight games from 2003-05 under John Thompson and Skip Holtz.

Montgomery is a 40-year-old former Duke and NFL receiver who came to East Carolina after a successful stint as Duke's offensive coordinator.

Under him, the Pirates lost 17 games by at least 20 points and were 0-5 against Top 25 opponents, losing those by an average of 40.6 points while never keeping it closer than 27.

His teams lost to Championship Subdivision teams in each of the last two seasons, opening 2017 with a 34-14 loss to James Madison and losing to North Carolina A&T to start this year. Of his four wins in league play, three came against Connecticut - which went 7-29 during that span.

But he did have two home victories over in-state Atlantic Coast Conference schools - a 33-30 win over N.C. State in 2016 and a 41-19 rout of North Carolina in September.

"As much as we would have liked the outcome to be different, the progress of a program is ultimately measured by its competitiveness, win total and championships," Staton said in a statement.

Complicating matters, East Carolina hasn't had a full-time athletic director since March, when Jeff Compher resigned under pressure. Former Tennessee AD Dave Hart was hired as the university's special adviser for athletics. His three-month extension in the position, designed to allow him time to evaluate the entire football season, expires Dec. 15.

The school says its search for a new AD remains "ongoing in earnest" and that person will "finalize the hire" for the new coach.

Montgomery was hired in 2016 to replace Ruffin McNeil, who was fired after finishing the season with a 5-7 record. McNeill, a popular ECU alumnus led the Pirates to three consecutive bowl appearances before his final season. He has since taken over the defense at No. 5 Oklahoma under coach Lincoln Riley, who was McNeill's offensive coordinator at East Carolina.