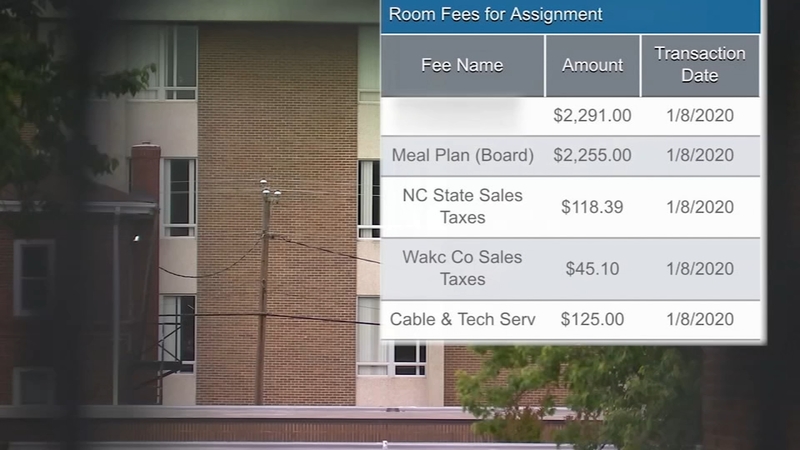 DURHAM, N.C. (WTVD) -- Colleges across the country are still struggling to adapt to online learning and stay afloat financially after COVID-19 stripped students from campuses in March.

The federal government allocated $14 billion through the CARES Act to help assist with the abrupt halt to operations.

The funding was allocated based on a formula that factored in the institution's number of Pell Grants recipients, a federal grant awarded to low-income students. However, ABC 11 discovered some universities like Duke received around $7,000 for every Pell Grant recipient while Edgecombe Community College received only around $800 for every recipient.

The government also took into account the student population and part-time students when allocating funds.

Around 40% of the students at the University of North Carolina at Greensboro are Pell Grant recipients.

Universities are mandated by the U.S. Department of Education to spend at least half of the funding directly on students, "for expenses related to the disruption of campus operations due to coronavirus (including eligible expenses under a student's cost of attendance, such as food, housing, course materials, technology, health care, and childcare)."

The federal government restricted online students and international students. To be eligible students need to have filed a Free Application for Federal Student Aid (FAFSA) or be eligible to receive FAFSA, according to the U.S. Dept. of Education.

Common questions regarding the CARES Act

Many universities said they have additional sources of funding to assist students in need who do not qualify for the CARES Act money.

While there are restrictions on who can get the money, universities have "significant discretion on how to award this emergency assistance to students," according to the U.S. Department of Education.

Because of the lack of specific guidelines, many colleges are still figuring out how and to whom to award the federal funds.

Shawn Lane is one of thousands of college students frustrated and confused after being forced to leave campus, but still pay for campus housing and meals.

"I feel like we haven't stayed there the whole semester to finish out school so that should be put back into the students loans so I don't have to pay all this money," Lane said.

Lane is a sophomore at Saint Augustine's University in Raleigh. He paid $4,455 just for housing and a dining plan for the semester, both services he can no longer use.

He said he did try to stay on campus but was denied. The university gave him a $500 emergency fund, but he thinks more needs to be given.

"More could be done and I feel like it's very unorganized," Lane said.

Numerous colleges ABC 11 reached out to hadn't received funding yet.

A spokesperson for Saint Augustine's said the university has not received its allocation of $1.4 million yet.

But for students like Lane, that wouldn't even cover half of the semester expenses for which he already paid.

The University of North Carolina Pembroke hasn't received its funding yet but has a task force working on a plan to expedite distribution of the funds.

The University of North Carolina Chapel Hill has already spent around $855,000 of separate funds to assist 937 students.

Prior to the federal funds, many universities already started spending significant money to reimburse students.

A spokesperson for the University of North Carolina Chapel Hill said the university spent around $15 million refunding students for "unused housing and dining costs and lost revenues due to suspension of parking fees for the remainder of the semester."

However, the federal government says the CARES Act money can't be used to reimburse colleges for these refunds.

Duke University refused the funds, saying in an email, "After careful review, we believe that accepting the funds, even as a pass-through entirely to students, would impose unacceptable legal and regulatory liabilities on Duke that could have a significant negative impact in the future. We continue to maintain our commitment to supporting students in distress through institutional and donated funds, and we will also continue to identify other sources of relief for the most vulnerable members of the Duke community."

The university spokesperson would not expand what the school was doing to assist students instead.

U.S. Secretary of Education Betsy DeVos has called on wealthy universities to reject the funds, writing, "Congress required by law that taxpayer Emergency Relief funds be given to all colleges and universities, no matter their wealth. But as I've said all along, wealthy institutions that do not primarily serve low-income students do not need or deserve additional taxpayer funds."

The other half of the funding can be used to cover "any costs associated with significant changes to the delivery of instruction due to the coronavirus," according to the U.S. Department of Education.

The University of North Carolina Chapel Hill said some of the things it has spent money on during the pandemic include remote online learning and increased campus cleaning sanitation.

Saint Augustine's is considering using the additional money to fund the purchase of new laptops for every new first year student in the class of 2024, along with operational costs for opening in the fall.

A spokesperson for the University of North Carolina Pembroke said it has spent more than $5 million on things like personal protective equipment, sanitizing products and technology, and it hopes the other half of the federal funds will assist with those costs.
Report a correction or typo
Related topics:
educationdurhamchapel hillraleighncsaint augustine’s universityabc11 troubleshootercoronavirusuncduke universitystimulus fundscollege
Copyright © 2021 WTVD-TV. All Rights Reserved.
CORONAVIRUS
FDA panel backs COVID-19 boosters only for elderly, high-risk
What are your chances of being exposed to COVID-19 at an event?
Illinois grandmother's obituary takes aim at unvaccinated
LATEST: Hospitalizations decline, ventilator use still at record high
TOP STORIES
Authorities search for Brian Laundrie in reserve; Petito still missing
Family holds memorial for teen lynched in Chatham County 100 years ago
'Relieved:' Faith Hedgepeth's family releases statement after arrest
US ramps up plan to expel Haitian migrants gathered in Texas
What are your chances of being exposed to COVID-19 at an event?
1 dead in Cumberland County double shooting, sheriff says
Show More
Heavy police presence as protesters trickle in for DC rally
Odette to increase rip current risk along NC coast; no threat to land
LIVE | SpaceX crew successfully splashes down off Florida coast
Man dies after Robeson County triple shooting, deputies say
'My Name is Pauli Murray': A Durham-made icon gets her due on film
More TOP STORIES News