Texas woman warning of COVID-19 after 6 relatives, including parents, die of virus 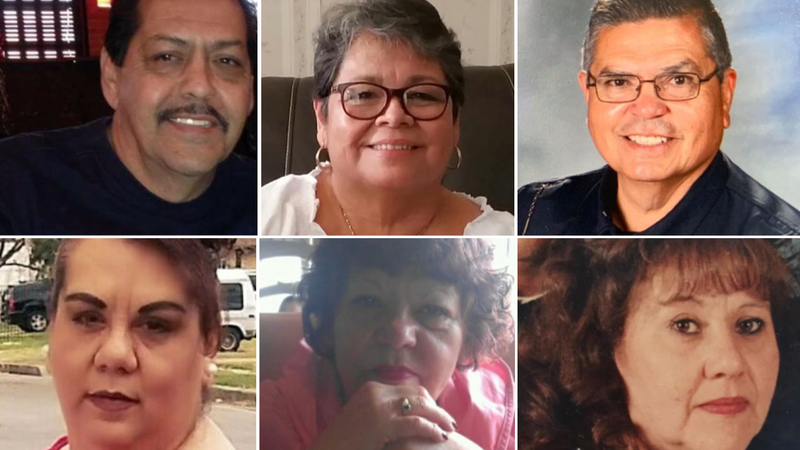 EL PASO, Texas -- El Paso, Texas, has been one of the cities hit hardest by COVID-19, and now a woman who lives there has a warning for everyone after losing six family members to the virus since May.

Bonnie Soria Najera shared her story in an interview with "Good Morning America," explaining that her uncle was the sixth relative to die of the virus.

"Last night, we lost another family member. My uncle passed away last night of COVID-19, so now it's six," Najera said.

Najera said what her family has experienced began on May 15, when her mom tested positive and went to the hospital.


After her mother was admitted, Najera didn't see her again.

"She started deteriorating really quickly. She was put on a ventilator after three days, and it just all happened so fast," Najera said.

But even before Najera's mom died, her dad started to feel sick. He would go on to be diagnosed with COVID-19, too, causing her to have both parents at different hospitals at the same time.

In order to help save her mom, the hospital wanted to try a plasma treatment. But after Najera signed the paperwork to give them permission, she received a devastating phone call.

"They said, 'Your mom's heart stopped. We couldn't do anything. She passed away,'" Najera said. "She went in on a Friday and passed away on a Friday."

Less than an hour later, her father was placed on a ventilator.

"He says, 'Everything hurts. I can't breathe. There's nothing else I can do. This is the only next step,'" she describes of the conversation she had with her father about his being on a ventilator. She didn't tell him at the time that her mother had died.

Three weeks later, she said her father's condition was up and down, but he seemed to get better when he was given Remdesivir, the first commercial drug approved by the U.S. Food and Drug Administration to treat hospitalized COVID-19 patients.

Najera eventually told her dad that her mother died, and then tragedy hit again.

As she and her daughters were preparing to head to the funeral home in June, Najera received a call about her father.

"My phone rings, and they said, 'Your dad's heart stopped. We've tried to shock him twice. We've tried CPR. What do you want us to do? Do we stop? Do we keep going?'" Najera said. "I mean, how do you make that kind of decision? It's your father."

After asking about his quality of life, Najera said she decided to let him go peacefully. Her parents were buried together.

Najera started to feel sick a couple of weeks later, only to find out, she also tested positive for COVID-19.

"It was so painful. I can't even describe the pain that I was going through," she said. "I've never been through something like that before. Not only emotionally, but physically because I was sick." Najera recovered, but shortly after that, both her cousin and an aunt, her dad's sister, died of COVID-19.

Last week, she had another aunt, who had to be hospitalized, die of the virus.

"She passed away on Monday, then my uncle," Najera said.

"My mother, my father, my aunt, my cousin, my other aunt, my uncle. They were all being very careful," she continued. "They did things that they had to do: grocery stores, went to doctor's appointments, that sort of stuff... the things that were essential things."

Najera said she wasn't around her parents and is still unsure how they contracted the virus. She feels strongly about a shutdown.

"It's just not fair. It's just not right. I'm sorry, I have a lot of family members and friends that have businesses, and I'm sorry, but we need a shutdown, a true shutdown where.... everybody stops and try to get ahold of this," Najera said.

Over the weekend, it was announced El Paso's temporary shutdown of nonessential businesses will continue for at least three more weeks under a new executive order issued by County Judge Ricardo Samaniego.

Najera is urging people to avoid holding large parties and gatherings and says it hurts to see friends of hers who post about holding the events, knowing what she's been through.

"Don't do it. You don't want to be in our shoes," she said. "It literally hurts me to see on my timeline on Facebook or on my Snapchat or Twitter, people are posting their birthday parties, you know, baby showers, and it makes me so sad because I know they see what we've gone through because they comment on my stuff, 'So sorry for your loss.'"

"Really? Are you really sorry? Because you don't look very sorry about that party you're risking your loved one, you're risking their life for a party," said Najera, adding that her family never had a party and still became sick.

Her relatives have chosen to cancel any holiday gatherings this year.

This is heartbreaking. A Texas boy will have to grow up without his parents, and it's all due to the coronavirus. In the video, his relatives explain the tragic events that cause one parent to die and then the other.