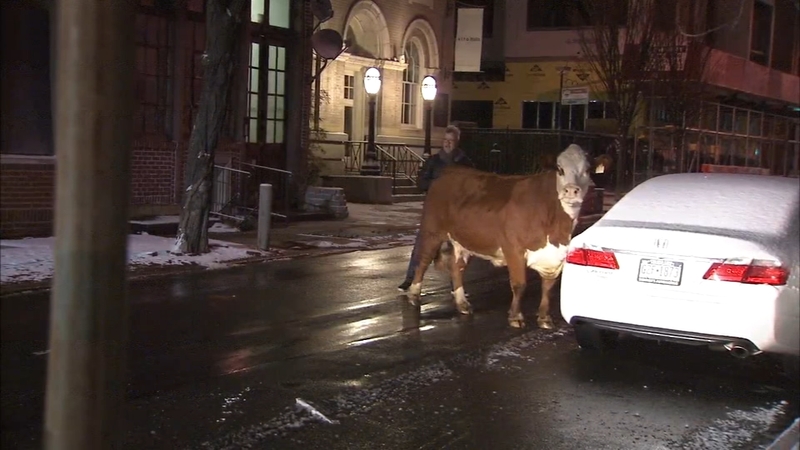 Loose cow corralled on I-95

OLD CITY -- A cow has been captured in a Philadelphia parking garage after escaping a church nativity scene for a second time. The cow was corralled earlier on I-95 in Northern Liberties.

The cow, nicknamed "Stormy," made her way out of Old First Reformed United Church of Christ in Old City around 6:20 a.m. Thursday, walked down Race Street and onto 4th Street.

The pastor of the church tried his best to stop the cow, but to no avail. The cow then made her way to the upper level of a parking garage at 4th and Arch streets where he was eventually cornered.

Earlier, the cow, whose name switched back and forth between 'Stormy' and 'Storming' during the course of the morning, was seen walking on I-95 southbound near Callowhill Street around 2:15 a.m.

Images from ABC11's sister-station WPVI showed Philadelphia and Pennsylvania state police walking the cow off of the highway.

At one point, police boxed her in with their cruisers.

Reverend Michael Caine of the Old City church tells 6abc the nativity scene has been part of the church since 1973.

After police corralled the cow on I-95, they returned her back to the church safe and sound, where she remained until it escaped again.

"Stormy" is once again back at the church.