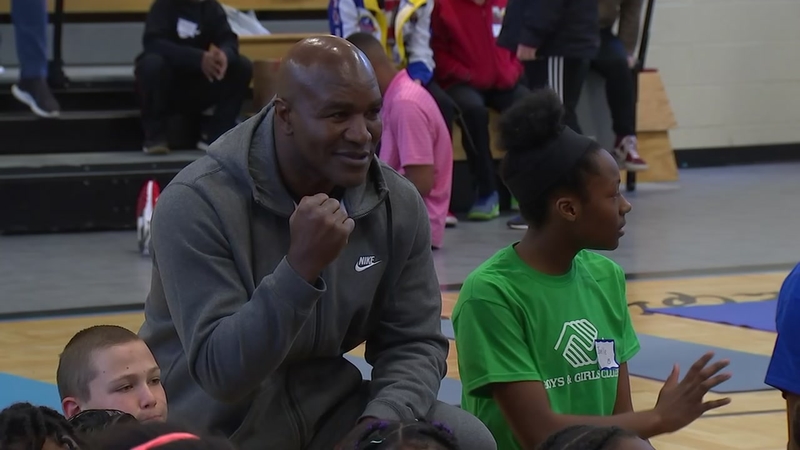 The former undisputed heavyweight champion of the world gave Raleigh kids a lot to talk about after spending quality time with members of the Boys and Girls Clubs on Saturday morning.

"You know, I started Boys Club when I was six years old," Holyfield told ABC11 while recalling his childhood in Atlanta. "I probably wouldn't be who I am if it wasn't for the Boys Club."

"Don't quit! That's what the Boys Club gave me," Holyfield said. "That's what my mama gave me, and pretty much what the Bible said."

His son Evan, also a professional boxer, said when he was 8 years old, he and his brother got boxing lessons at home from their dad one day.

"He took us downstairs, he taught us the one-two, how to jab, you know, straight right," Evan said. "If you're a southpaw, it's gonna be a straight left. He taught us that and after about 20 or 40 minutes he told us to go back upstairs, hang out and stuff."

Minutes later that same day, Holyfield had Evan in the ring at a nearby gym, with boxing gloves on, for his first bout with another boy.

He won that fight, but waited until he became an adult before deciding to turn pro. Now, he travels with his dad and spreads the word about the benefits of amateur boxing.

"Keep your head in the right place, because focus is the number one thing that can make champions or break champions," said Evan.

Evander Holyfield gave the following piece of advice for kids looking for success in their life: "Listen to your parents. They're going to tell you they're going cook the food that they have, but these are the things that help you nutrition-wise."

Nutritious food for the body helps children develop muscle and stamina, while advice from the Holyfields undoubtedly helps develop character.