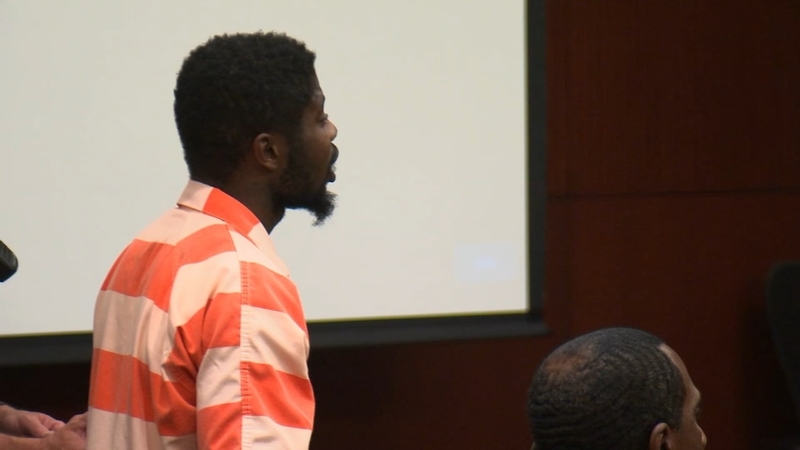 Man accused of exposing himself to NC State students

RALEIGH, N.C. (WTVD) -- Several NCSU students say a neighbor welcomed them back to Raleigh for the fall semester by exposing and touching himself in front of them.

Samuel Ekunwe-Nelson Aghimien, 29, was arrested and charged with indecent exposure.

The victims, who didn't want to be identified, said they had just moved into apartments adjacent to the N.C. State University campus and were trying to set up their new homes and enjoy a few free days before class.

But they said every time they went out on their third-floor balcony, the suspect would show up outside his apartment below and expose and touch himself.

"It was so distracting. He was like looking at us. And like then he stood up and we could hear him. And it was just really disgusting and like just nerve-racking," one of the victims told ABC11.

Another victim who lives in the same building said she was unlocking her back door outside her second-floor apartment when Aghimien approached her and tried to strike up a conversation.

"When I knelt down to put my U-lock in my backpack he exposed himself to me. And I just stood up and walked away. And then he followed me down the stairs and kept trying to talk to me as I left the apartment complex," she said.

The young women got together and decided to call the police.

Police said when they tried to arrest Aghimien for indecent exposure, he threatened and assaulted them.

But Wednesday afternoon, he told a judge at the Wake County Justice Center that it was the police who assaulted him.

Despite the prosecutor describing some of Aghimien's prior 10 arrests in Wake County since 2006, which include assault and sexual battery charges, Aghimien asked the judge to lower his $12,000 bond.

"I have to go to work, OK," Aghimien said in court.

All the victims are upperclassmen and said they've never encountered this kind of thing in past years in Raleigh.

"It is a little bit unsettling for something like that to happen so soon after we moved in," said the victim who was directly approached by the suspect.

She said the fact that exposed himself to her while she was just inches away is also unsettling.

"It's kind of scary to think that he was so comfortable coming up to me by myself. And if I was completely alone there was no one else like nearby or I wasn't as comfortable just walking away from him as I was, that he might have been more comfortable taking it a step further," she said.
Report a correction or typo
Related topics:
raleighwake countync state universityindecent exposureflasherstudent safety
Copyright © 2022 WTVD-TV. All Rights Reserved.
TOP STORIES
Police looking for Johnston County man in Fayetteville double homicide
Shaw University rolls out plan to redevelop downtown Raleigh campus
Raleigh Fire, Police warn of looming problems without major pay raises
Baby giraffe fitted with orthotic at San Diego Zoo Safari Park
NC Primary Election: What to know before you vote
Baby formula maker Abbott says agreement reached to reopen plant
Cumberland County mom on mission to help other moms with infant needs
Show More
What we know about the victims of the Buffalo shooting
You can now order 3rd round of free at-home COVID-19 tests
NCCU law analyst: 'Replacement theory' driving increased hate crimes
Hamlin, Jordan team wins second NASCAR race
Reward offered for information on endangered red wolf death
More TOP STORIES News