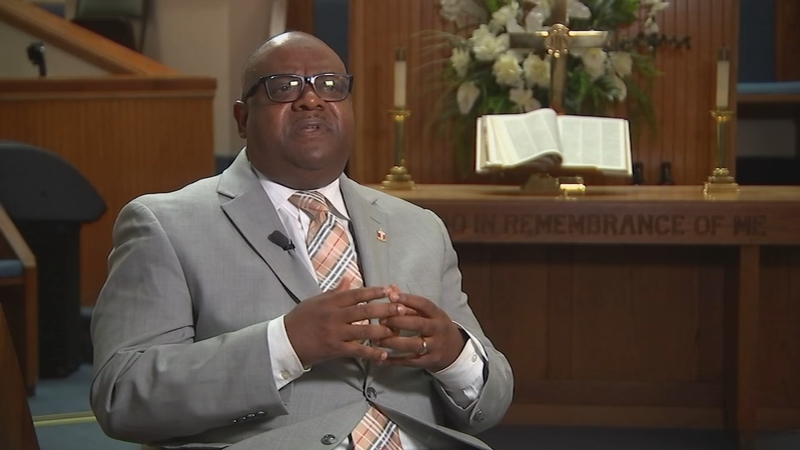 RALEIGH, N.C. (WTVD) -- The Almighty tells Moses to tell the people "Let them build me a sanctuary so that I shall dwell among them (Exodus 25:8)," but the Bible lacks any contingency plans for a global pandemic.

"How do you tell the congregation you're going to honor the words of the governor but not meet on Sunday?" Pastor Joe Stevenson, spiritual leader of Macedonia New Life Church in Raleigh said to ABC11. "The Zoom rooms have become our Sunday School rooms and then sadly, to some extent, the pandemic has allowed us to become used to that artificial gathering."

Indeed, there is something incredibly authentic about Sundays in African-American communities: the singing, the shouting, the dancing, the praying and the preaching. They were all part of Stevenson's upbringing that he considers a "calling" from God.

"In the tradition, you're called. It's not an occupation. It's a divine vocation," he said. "My grandfather was a pastor-preacher, my uncle is who ordained me. It's following that family tradition."

Stevenson's grandmother, however, might have taught him the most important lesson of all.

"I grew up in Mississippi, born in the Deep South, and I was the first person to take piano lessons. My grandmother would come out, reach her shoulders over and positioned my fingers on the keys and suddenly I'm learning how to play Jesus Keep Me By the Cross by ear. That's when that started, and I released those tensions I might have been harboring, although I didn't know it until later."

Decades later, Stevenson finds himself on the alter looking out over his congregation and noticing how prayer served both the Holy One and the parishioner.

"They lack the ability to pay for a psychologist, they weren't able to have help to deal with mental or emotional challenges," he explained. "To shout it out in a hymn of the church, 'Father I stretch my hand to thee no other help I know, guide me.' That's how they settled some of those emotional pains and issues."

The COVID-19 pandemic, of course, only exacerbated those emotional pains as the disease disproportionately affected economically disadvantaged communities that have less access to affordable health care and nutrition, while also living in close quarters.

Those external factors notwithstanding, preachers such as Stevenson were presented with the daunting task of having to empower their neighbors to seek help in other ways since the pandemic's trauma - not to mention old wounds of racial strife - couldn't be prayed away.

Pastor Toshiba Rice, a religious leader in Wilson, found herself in the same predicament and found her calling in preaching to the preachers.

"if you broke your arm, you wouldn't just stand there and pray. You would pray and head to the emergency room at the same time," Rice, also a key leader of Greater Faith Raleigh, told ABC11. "It's not that prayer isn't enough. It's that you need the prayer and you also need the amazing physicians and therapists that have been placed on Earth for us with knowledge, skills and abilities."

Rice has since founded the ImWELL network, a training program for religious leaders across the country. On May 6 -- the National Day of Prayer -- she welcomed more than 100 such leaders from across the country to her virtual learning.

"Let's teach them there's another remedy, another answer and prayer that God has for you - a person who can talk to you about strategies called a therapist. And it's not a bad word."

Pastor Joe Stevenson is certainly ready to sign on to that homily, and won't hold back when the congregation finally meets in person again.