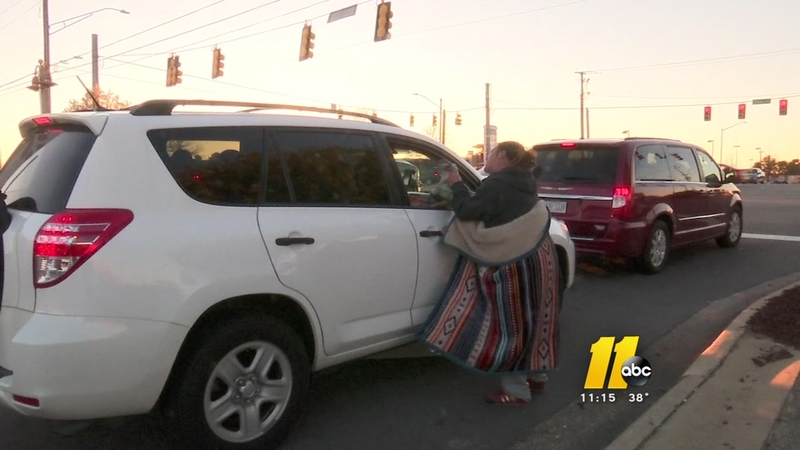 Fayetteville considers ban on money to the homeless

FAYETTEVILLE, NC (WTVD) -- There is a new push in Fayetteville to fine people who donate money to panhandlers. The ordinance would target major intersections where panhandlers collect cash.

ABC11 was introduced to a homeless woman named Michelle who sat at the intersection of Skibo rd near Cross Creek Mall.

"Homeless and hungry. Please help. God bless," said Michelle. "I'm just as human as everybody else out here and everybody thinks I have a disease because I'm homeless and holding this sign."

Our cameras watched as she accepted donations and money. She sat and patiently and waited to collect money from drivers.

"I don't do drugs. I haven't. It's not true. People are out here wanting help and everybody wants to scream 'get a job,'" said Michelle.

She lost her mobile home to a fire seven months ago. With no insurance, she said she's been unable to get back on her feet. She's been without work for some time now. City council members are taking up a measure that could penalize drivers who help people in need.

"They won't be able to step out into the road to give or receive stuff. It's not a criminal assessment, it's a civil assessment," said Councilman Jim Arp.

Arp said it's modeled after an ordinance that Charleston, South Carolina, has in place. It keeps drivers from stopping traffic while giving to panhandlers.

"First time is a warning. Second time is a punitive damage between $50-$100," said Mayor Mitch Colvin. " The third occurrence may be a little stiffer penalty up to $500 if I understand that."

The mayor said the council is still fine-tuning this measure, but they could have a concrete plan at Monday's meeting. Meanwhile, Michelle has asked council members to consider a different plan that wouldn't penalize those who give.